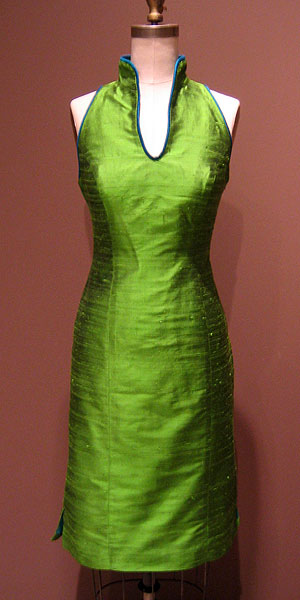 Last week I posted about my initial dress shopping trip, as well as my dumb idea of deciding that the first time my family and Japh’s family meets we should go dress shopping. Alright, it wasn’t a completely dumb idea but I’ve had better ones. I’ve previously written about our “parents meeting parents” experience here (Back-story: I have a personal blog that morphed from a NYC dating blog to a space that I’ve carved out on the internets to use as an online journal that I intermittently update). Moving along–so our parents meet and the ladies (my mom, Japh’s mom and Japh’s two younger sisters) and I head over to the dress shop.

We arrived a bit late for our appointment but the one previous to ours was running a behind schedule so all was not lost. Kimera Designs is not a traditional wedding dress store. It’s teeny (but quaint) and it encompasses about 2 small sized rooms. The second of which is where the dresses are kept — out in the open for customers to peruse and pull ones they would like to try on. Yvonne, the shop’s owner and designer was occupied with the previously mentioned client so we decided to look through the racks and find something for Japh’s sisters.

Now imagine a small boutique style shop located in an upper crust neighborhood in Brooklyn (for those of you who aren’t familiar, this particular park of the Bk is littered with expensive specialty shops. These shops are also seriously small due to the high cost of rent), and I brought a party of five anxious women to search for dresses. My soon to be sister in laws are lovely, and I’m quite lucky to have them in my life but like myself, they can be a bit…loud. They also don’t take well to being told what to do, and when Yvonne prompted one of her less than adept saleswomen to assist us things got a little hairy.

So there we are going through the racks when we are approached by the saleswoman, let’s call her Heather*. Something about Heather strikes me as a bit…off putting. Her face is twisted in a permanent look of disdain. She seems aggravated with us and doesn’t attempt to hide it. I start pulling a few dresses for the girls to try on. Some were good and some were bad (for their shape). One particular dress that Japh’s youngest sister put on was just downright unflattering and just as we are about to tell her so Heather* jumps in with a lecture about high fashion and how we’re not giving the dress a chance. Okay–really? This is coming from the woman who’s wearing khaki capris, a too tight ironic t-shirt and Crocs? Heather continues for a bit and the girls are quiet but I can tell that they aren’t pleased with being spoken to as if they are fashion morons.

At this point I’m mildly aggravated and decide to chime in–I tell Heather that her assistance is no longer required and that if she would just scoot along I’m certain that we’d be fine without her charming words of wisdom. Heather rolls her eyes and then Yvonne prompts her to leave us be. I typically have a pretty bad temper but I tried my best to be as insulting with a civil tone, just as this woman had and while the tension in the room was terribly thick I think that stating such to her was the best way to defuse the situation.

In any case, we found dresses for both girls but afterward I had intense feeling that the price point was not to their liking. Kimera’s dresses start at around $175.00. The ones that looked gorgeous on the girls came to around $275.00 each. For a custom made dress that’s pretty standard. About 95% of the wedding is being funded by Japh and I (my parents are purchasing my dress and accessories — which as a side note I scored for just over $500, including taxes and alterations) and at the time, I kinda felt that the least that could be done by  his side of the family is buck up for the dresses for his sisters. Thinking back on it, that was entirely selfish of me and I’m pretty embarrassed and disappointed in myself for thinking such. Unfortunately I did not come to this conclusion until about 5-weeks ago. At the time of this occurrence (early April) it had been settled that the girls would wait until June and then place deposits on their respective dresses.

As you can see, all the dresses here are of different styles; I’m not really into the concept of all the gals wearing the exact same outfit due to the fact that all three of them have totally different body types. Cathie is tall, slim and statuesque. Sarah is tall with fantastic broad shoulders and looks great in halter and strapless styles. Becky is short, curvy and far bustier than the rest of us. I don’t think that it would be possible to find a dress that would suit them all. The color will be in the same family (we’ve chosen brown) which will help tie it all together.

Over the course of the weeks between this instance and now I’ve gone back and forth on the most economical and eye-pleasing course of action for the bridesmaid dresses. Once we finally all agree I’ll update.

Has budget been an issue for your bridesmaids? What do you think is a reasonable price for a dress?