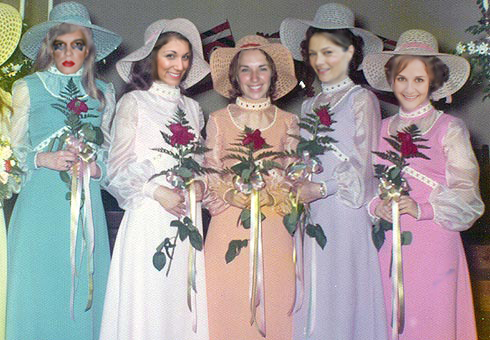 While Matt worried about which buddy he couldn’t include in his party I had the opposite problem. I only have a handful of really close friends and when Matt decided on 6 groomsmen I easily produced 4 but two more would be tough. We decided it didn’t have to be even though and I ended up with 5. With one of his groomsmen officiating it kind of evened out anyway. I was too excited to wait to ask my friends to stand up for me so I did so in person or over the phone. I knew I still wanted to ask them in a special way, though, so a few months after our engagement I sent each of my ladies (and one gent) these!

Using photoshop I took pictures of the girls faces and pasted them on some horrendous bridesmaid dresses, don’t they look great! I had the photos printed and glued them on to white scalloped card stock so I could write a nice message on the back asking them to be a part of our wedding. Also included was a chocolate candy flower from Miette, a great candy shop in San Francisco:

I packaged them up in a mailer and added some glitter for good measure. I sent them all through the post since only two of my bridesmaids actually live in LA and I figured even they would enjoy getting mail!

Seeing this gorgeousness Matt jumped on the bandwagon too and made this beauty to email to the groomsmen. He also sent his guys funny old postcards we found at the flea market asking them to join the party! Sadly I don’t have a photo of these. 🙁

This was a relatively easy project to do despite my abysmal photoshop skills. I had lots of help from Matt but basically we just googled “bad bridesmaids.” The one I found already had their faces blurred out making it even easier for us to crop faces out of other photos and paste them on the bodies. I wanted a photo quality picture and so I had them printed at CVS rather than just printing them myself.

I think everyone enjoyed them, I know it makes me smile every time I see that picture hanging on our fridge!

Did you ask your bridal party in a special way?