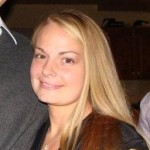 A while ago, my boss at work approached me and said she would like to get a group together and do something for us for the wedding. They said they would like to do our flowers, knowing this was something big they would be taking on, we decided their gift would be flowers/centerpieces for the reception and I would have the bouquets done by a florist. This is an amazing gift and will be so helpful for us. I was now tasked with finding a florist to do the bouquets, boutonnieres, and corsages for the wedding. So, of course, I took to Pinterest to look for some inspiration. I didn’t want to be too picky, because I wasn’t willing to go out of budget for specific blooms! Here was the one I pinned that served as the inspiration:

This bouquet was not only for a black and white wedding like mine, but incorporated some of my favorite flowers – white hydrangeas and dahlias. Here is a view of the same bouquet from a different angle. I love the way she wrapped the handle – looks like black ribbon covered in white lace – love it and might have to borrow that idea!!

I just loved everything about the bouquet, but didn’t want to get too attached since I wasn’t sure about the budget and how much it would cost. I tried to do some research online to see how much bouquets and boutonnieres would cost, based on that, we set a budget of $800 for our flowers. This would cover:

My best friend got married in June and had the MOST amazing flowers, but she also had a hefty flower bill. However, hers included receptions flowers and I did not need to include that. She also specified what she wanted and did all different color bouquets which matched our different color shoes. They were absolutely beautiful, but I know they cost a pretty penny! Here is a photo to show you how amazing they were and they were super full bouquets, the bride’s must have weight a good 15 lbs!!

When I showed my best friend the inspiration bouquet – she said “That is so Mrs. Sue!” which is who did her flowers. Mrs. Sue formerly worked out of her own shop in Berlin, MD, but has since taken to teaching floral classes at a nearby university and only does weddings on the side. I decided I would set up a meeting with Mrs. Sue and see if she could work with my budget. I told her we were on a tight budget, but didn’t want to give her a specific number, I wanted to see what she could do the first go-round.

It was a wonderful meeting that lasted 2 hours, she asked me about how I met Nick and how he proposed, all about the wedding, she wanted to see my dress and hear about my favorite flowers. Then I showed her my inspiration photos – telling her the one I loved the most (the ones above) and she started pulling pictures and giving me ideas and we broke everything down into my bouquet and how it would differ from the BMs and MOH. We decided that mine would look very much like the one above, using hydrangeas, green cymbidium orchids, and eggplant colored dahlias. The MOH would have the orchids as well and the BMs will have green pom pom mums (or button mums) which look like this:

As for the boutonnieres, the groom, Dads and Grandpa will have the green cymbidium orchids like my bouquet and the MOH’s bouquet, which look like this:

The rest of the groomsmen will have the button mums like the other bridesmaids. The corsages for the moms and grandmas will also incorporate the orchids. I left the cake flowers up to her, but might specify the dahlias, I haven’t decided yet. I also left the church flowers up to her, our church is beautiful on its own, so I opted to cut some costs there. She did say that was where she might pull in my other favorite flowers like football and spider mums which look like this and come in lots of colors:

I am sooooooo excited to see how the flowers turn out – originally when she added everything up, we were at $972, nope – out of budget. I asked her to make some cuts to see if she could get it under $800 and we ended up at $743! I was so happy, I know that she is amazingly talented with flowers, so I know I am going to be happy no matter what!  Eeeek, even more excited now!!So, is $800 budget savvy??? It’s hard when you only know weddings where they spent a couple thousand – so to me it seems budget savvy. I am so lucky to work with wonderful people who will take care of my reception flowers!!

How did you choose your wedding flowers? Did you incorporate a favorite flower? Did you do something different with your bridal bouquet vs. MOH vs. BMs?