I’m so excited to be a new bridal blogger on BSB! I wanted to share a little about myself and my wedding plans with you, so here goes:

So a little bit about my fiancé and I….Richard and I met early in 2012 when I first started working at the Country Club we are both employed at. At the time we had mutual friends, but hadn’t really hung out outside of work (with the exception of being in the same Fantasy Football League). In December of 2012 the Redskins (Richard’s team) and the Seahawks (my team) were to play against each other in the playoffs. It was then that Richard and I really started to talk and become friends through our love of football. He and I had placed a friendly wager that whoever’s team won the other person had to wear their team’s jersey in their Facebook profile picture for the remainder of football season…of course the Seahawks won! In early February 2013 Richard asked me on our first date and we’ve been inseparable ever since!! 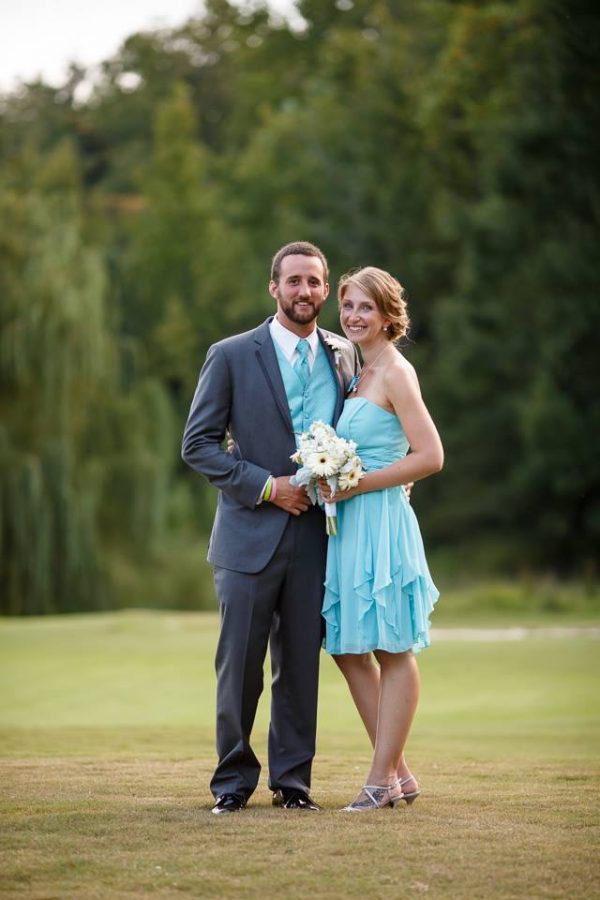 When the topic of our engagement comes up, it is very difficult to pinpoint one thing that stands out as my favorite part. There are a lot of favorite parts to our engagement story….Richard had put a lot of thought into every detail. My absolute favorite holiday is Halloween so that is where he began planning his proposal. When Richard and I found out that I was pregnant we had thought about how to break the news to his family. Richard has a very tight knit family and we all meet at least once a week for dinner at a local Mexican restaurant. It was really tough to keep our pregnancy a secret, but we did for 2 weeks (we wanted to wait until the first ultrasound to make sure everything was okay before we broke the news). The day after the doctor’s appointment we had planned to attend Busch Gardens Howl-O-Scream with Richard’s parents, brother, and future sister-in-law. On the way to Busch Gardens Richard’s sister-in-law had made a joke about me being pregnant and we thought maybe they had already known, but it ended up being a crazy coincidence. We waited until we made our way to the Fest Haus to share the exciting news. As we were taking a picture of Richard’s parents we announced the news so that we could capture the look on their faces! Back to the proposal….fast forward one year later…when we got to Busch Gardens Richard immediately headed for the Fest Haus (stating that he wanted to get a good Oktoberfest beer), but he had other plans in mind. When we finally reached the Fest Haus with drinks in hand his brother offered to take our picture. As he was taking the picture Richard said “you know what would be the best birthday present ever…if you would say yes” next thing I know he is down on one knee asking me to marry him! My mom had given Richard the diamond that my dad had given her (he passed away in June of 2013). Richard had a custom ring made with the diamond from my dad. Right after Richard proposed my dad’s favorite song started playing over the speaker system, which was a random coincidence. I really felt it was a sign from my dad that he was approving of our marriage. Overall I can’t pinpoint one favorite party of our engagement story…it was perfect and a moment I will never forget! 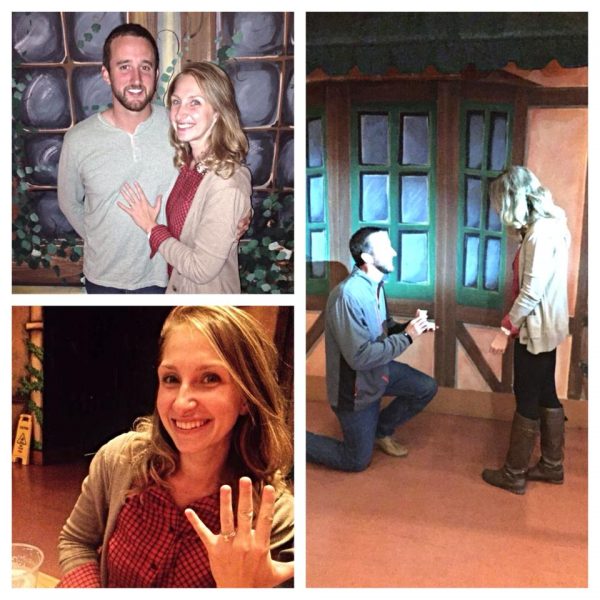 Okay so our last point of business…the WEDDING! I work with brides on a daily basis as the Director of Special Event Sales at a Country Club. Richard and I had discussed our marriage plans here and there before becoming engaged so we had an idea of what we wanted to do. We are doing something totally different than the norm…we want to look back on the day and know that everything we did showcased our love to the fullest. We decided on doing an intimate wedding the Thursday before my 30th birthday with just our immediate family because it is more us. Neither of us are big on being the center of attention so we really wanted to keep the ceremony intimate. With that being said, Richard has a HUGE family and they are all very close, so we knew that we would have to do some sort of celebration that involved extended family and friends. We plan on doing a big celebration with friends and family the following Saturday. Our theme is modern but classy. We plan on doing bright colored florals with gold accents….a lot of glitter and sequins (but in a tasteful way). Our overall budget is between $10, 000-$12,000 for the two events combined.

I look forward to sharing our planning adventure with you!