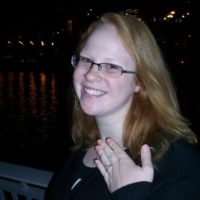 I went to my first bridal show in January, which I attended specifically in the hopes of winning free stuff. The librarian in town told me that her daughter went last year and won flowers, so I was sold as soon as I found out about it. So now I will have to sit back and hope that 1) I win stuff and 2) I am not inundated with other, unwanted stuff. There are about a billion of these in January, but I’ve managed to narrow down the list to two.

Unsurprisingly, the place looked much like Valentine’s Day had exploded in the student center. Everything was tinged in pink, including enormous feather-duster centerpiece poofballs that blended white and pink feathers into a monstrosity of fluff and Barbie. The corporatization of weddings was evident at every booth, with my only salvation in some cases being the fact that I could tell many of the vendors that I had already booked [a photographer, a reception site, DJs, etc.]. Actually, it made me feel pretty accomplished overall. Sweet.

Jon’s favorite part was the elaborate catering area (read: samples, and lots of them), where he declared that we should go to as many bridal shows as possible. I’m also convinced that they were serving Jello shots, there as well, so that was interesting.

We also stayed for the fashion show, which Jon actually opted to watch commentate on rather than moving to the auditorium for the Bears game. As the person who can be amused by anything, he found much humor in just about everything they did, including:

All-in-all, it was pretty much what I expected it to be, with free food and [hopefully] some free stuff. Bridal bliss? No. But at least there was some bridal browsing, and Jon got plenty of brownie points from a variety of people for attending—and he kept me entertained, as usual.