I was a bridesmaid for a close friend’s wedding in September (the bride had 11 bridesmaids, with several being from out-of-state).  Her Maid of Honor had already thrown her a nice bridal shower in Mississippi, and someone needed to step up to put together a shower for her here in Nashville.  With having been recently engaged a month prior, I thought this seemed like a good opportunity to test a few of the ideas that I was gathering for our wedding, but in a more constructive and considerate way.  Her other shower had been more formal/classic, as expected for a Southern Bell from Brandon, Mississippi, so I decided to pour on the country rustic charm for her Nashville gathering. 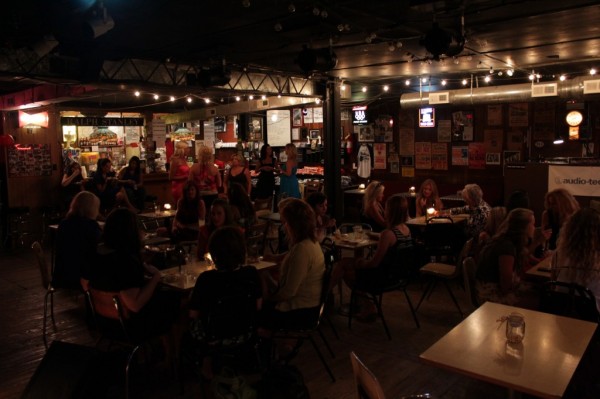 I knew I needed a venue that was both affordable (ideally free), contributed to the shabby country theme to cut back on outside decorations, and that could accommodate a guest list of around 60.  Coincidentally, I work part-time at a well-known music venue in Nashville that was the perfect fit– The World Famous Station Inn.  With having gone a tad “overboard” in my lengthy planning (I even had a binder), I could write several posts on this, but have broken things down into some useful tidbits from this learning experience:
Begin at the Beginning– Invitations DO Set the Stage

I have a great friend (and bridesmaid) who is a graphic designer.  She will oftentimes come up in future posts, so we’ll call her Penguin to protect her covert identity (unless you’d like to hire her for any projects, in which case you can message me).  To set the vibe for the shower, Penguin drew from the popular Nashville Hatch Show Print inspiration, as these prints/posters are also found lining the walls of the venue.   After getting the design in place, I printed and cut them myself, stuck with a size that would allow for cheap envelopes & standard postage.  I did spend more on the invites than I had initially planned, but got several compliments on them.  I have to admit, they were without a doubt the best shower invitations I’ve seen to date– Way to go on the design, Penguin!

I constructed simple centerpieces for the shower with Mason jars, vase filler, rafia & floating candles.  I thought that visually the centerpieces looked nice, set a softer tone for the room than it usually has, but the small candles were a pain to keep lit.  It could have been because they were so small, but I decided against using these at our wedding.  I’m a perfectionist generally, and not having all candles stay lit throughout the shower bothered me. 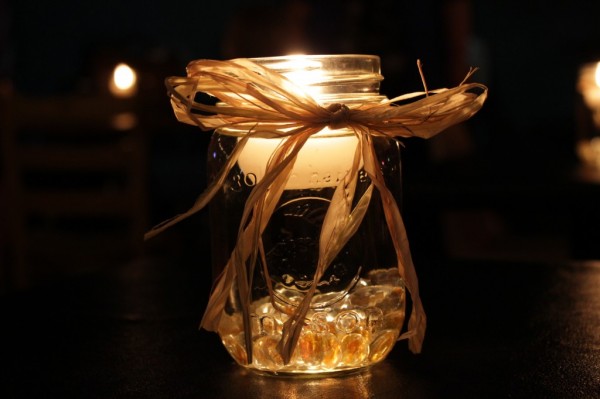 I had also seen ideas on Pinterest for a s’mores bar and fell in love with it.  I decided to make a scaled back s’mores bar for the shower to test the idea.  I thought the bar added a nice element (although in doing one at a wedding, I would made some different upgrades), but the catering candle went out several times & needed re-lit, which was a slight pain.  It obviously wasn’t the end of the world, but someone at a wedding would have to keep up with this or it’s useless.  There were a couple of kids at the shower who were running around (also a learning aspect), and the s’mores bar was of course an area of interest for them.  I was EXTREMELY concerned with one of them knocking the table and getting severely burned (the catering candles are made of gel that you light)– For a wedding, a bigger, sturdier area would be better, and positioned away from higher traffic areas.  Lastly, not many guests at the shower actually made s’mores, although several did comment that it was a great idea.  It was a cost-effective thing to add and I would suggest it to other brides, but am electing to skip it for our Big Day just based on actual use during this trial run. 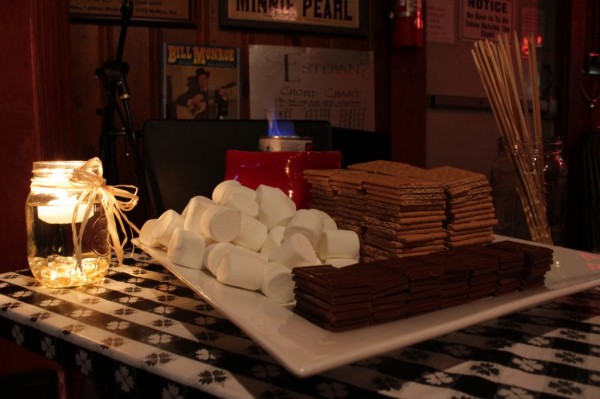 I made a TON of cake pops for favors, nicely packaged, with a cute label on the front (I’d cashed in a Groupon for the customized labels).  This was a great idea, I enjoy doing things like that, but if Penguin hadn’t come over to help me, I would have been in a world of trouble time-wise.  I feel like the guests appreciated the favor (I distributed them to ensure nobody got out without one), but I made way too many.  Then again, leftover/extra cake pops never seems to hurt any feelings! Mmmm… 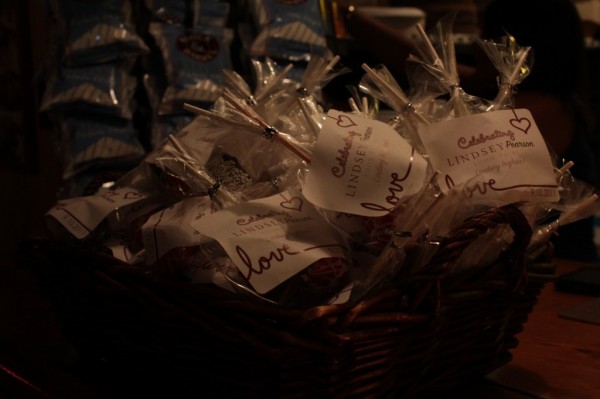 I’d seen tutorials for making cake stands and this is something I would hands-down suggest.  I chose to make mine out of plates & vases, glue & spray paint.  These were a great idea, and I plan to repaint the ones I have, plus make more for our wedding.  Click here for a great tutorial, although I elected to spray paint mine (make sure you use food safe spray paint if you’re planning to have food directly on the stand).

One of the most important things that I learned from putting on the shower was that even though you CAN do something yourself, it doesn’t mean you always SHOULD.  I will always hate delegating, I will always feel insecure in not knowing that something is getting done by doing it myself, but I have to get over that.  With the stress of planning a wedding, the last thing a bride needs is a ton of additional worries.  The shower was a wake-up call for me in this area, and I’m constantly putting thought into who I can have help with what, and keeping up with areas that certain individuals volunteer to help with.

The closer you can realistically estimate, the better (common sense, I know).  I started out without a budget because it was “just a shower,” and that was a mistake.  Even  budget savvy/thrifty purchases and plans can quickly add up without keeping a grasp on the big picture of your expenses.  Regardless of whether you’re getting a great deal on  paper lanterns in Chinatown on a vacation to New York for a great price (Pearl River beats most I’d found), you’re still spending that additional money & need to put early thought into it.  Whether you’re spending in tiny pieces or large chunks, it accumulates.

Overall, putting on the shower was both a very helpful and fun experience.  I had some great friends step in to help me (that weren’t even necessarily involved with the bride), and I couldn’t have done it without them.  I have a feeling that this is something that will hopefully extend throughout our wedding.  To sing their praises even more, they put on one heck of a surprise engagement party for Eric & I the same weekend, but we’ll save that story for another day!