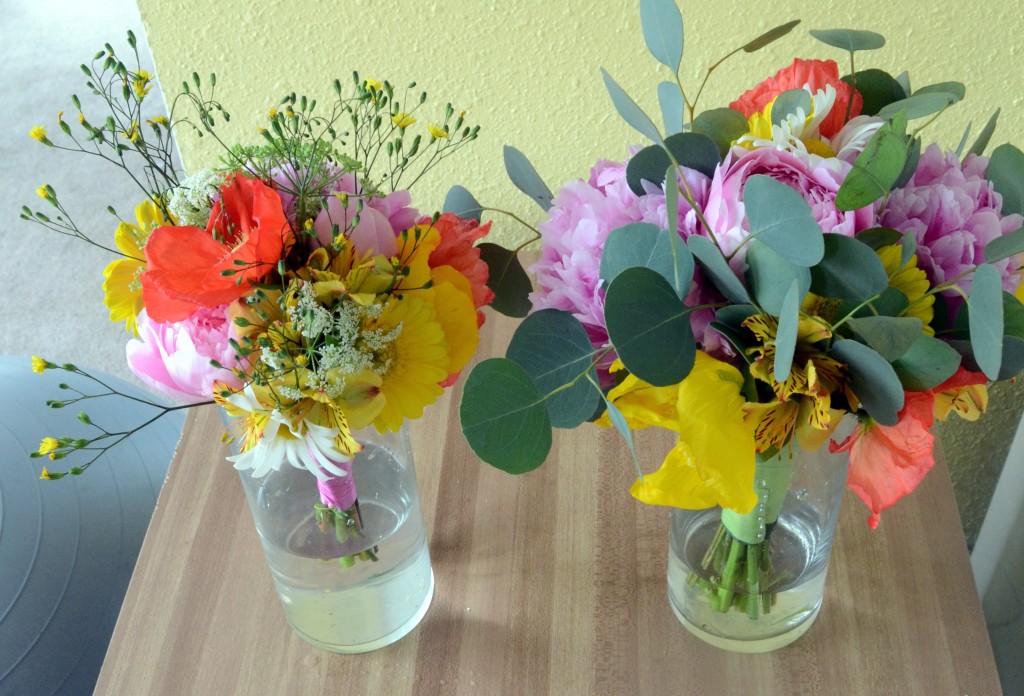 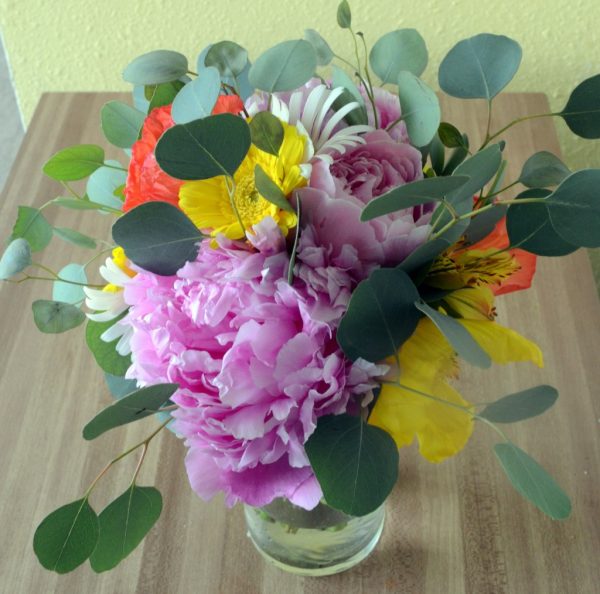 Google tells me that the average cost for wedding flowers runs $1000-$2000. Well, even if I had an extra $2000 I wouldn’t be spending it on flowers, so John and I decided to DIY this part of the wedding. I love buying flowers for our house and arranging them in vases, so how hard could it be? But still, I knew a dry run was important to get an idea of our options as well as how to make bouquets. Here’s my experience and what I’ve learned along the way.

First I had to figure out where I would be getting these bulk, unarranged flowers. John and I made a commitment when we started our wedding planning to put money into local sustainable businesses. And so with that I discovered the Seattle Wholesale Growers Market. They sell wholesale to local florists, from local growers. You need a special buyers pass most of the time, but they’re open to the public Fridays 10-12. This works perfect for us since our wedding is on Saturday, we can get and set up the flowers the day before.

Tip one: Try not to buy all the flowers you see

For a dry run, at least. The wholesale market was essentially a large warehouse with buckets and buckets of flowers. I know flowers aren’t for everyone, but I love them, and I wanted all of them. I was sad to discover that the prices are not at wholesale prices during the time that it’s open to the public, however it was still cheaper than other options, and the quality was outstanding. Below is a photo of peonies I picked up at the produce stand near my house next to the gigantic peonies I picked up at the wholesale market. The little guys on the left were 5 stems from the produce stand for $6.99. The big guys on the right were 5 for $20 from the wholesale market. More expensive, but also they’re so huge you’ll need fewer of them for the big impact. 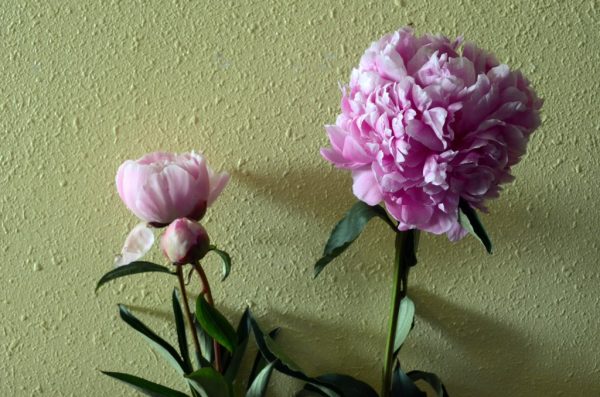 In addition to the flowers, I got a bundle of eucalyptus. I love a green bouquet! Then I realized that the Queen Anne’s Lace that they were selling for $13 a bundle grows like a weed outside my house, so I collected my own bundles for free.

Tip three: Let the water sit in the vases for a while before putting the flowers in 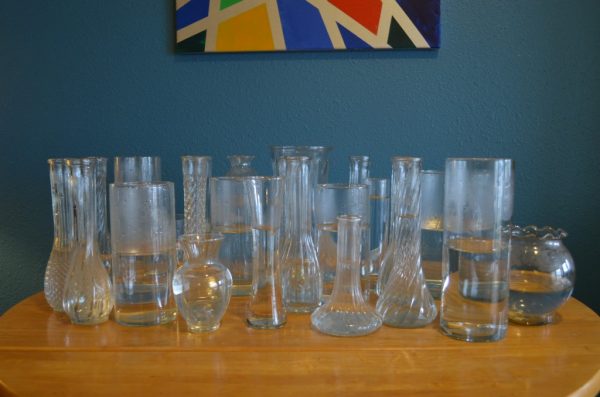 At some point in watching YouTube videos on flower arranging I learned the tip that you should let your flowers’ water sit for a little while. When water comes out of the tap it gets lots of little air bubbles, and if you stick the flowers in right away you can end up with some sad flowers.

Once the water sat for a few minutes I trimmed the ends of the stems at an angle and put them in the vases randomly to get an idea of the color scheme I had going. And just for fun. 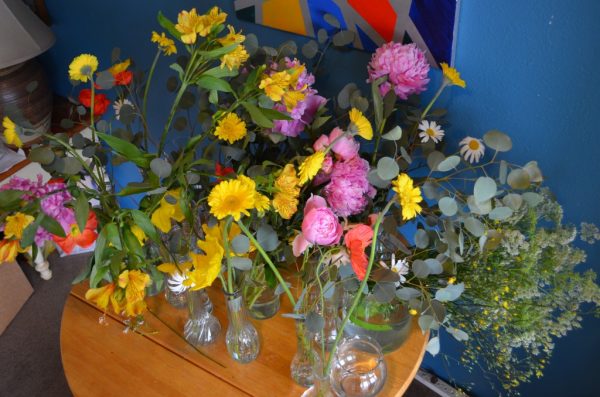 Then came time to make the bouquets. I have never made a bouquet before, so it was a lot of YouTube videos, Pinterest tips and playing around. Here’s how I made mine:

1. First I trimmed off all the leaves from the stems, leaving me with flowers on a naked stem. 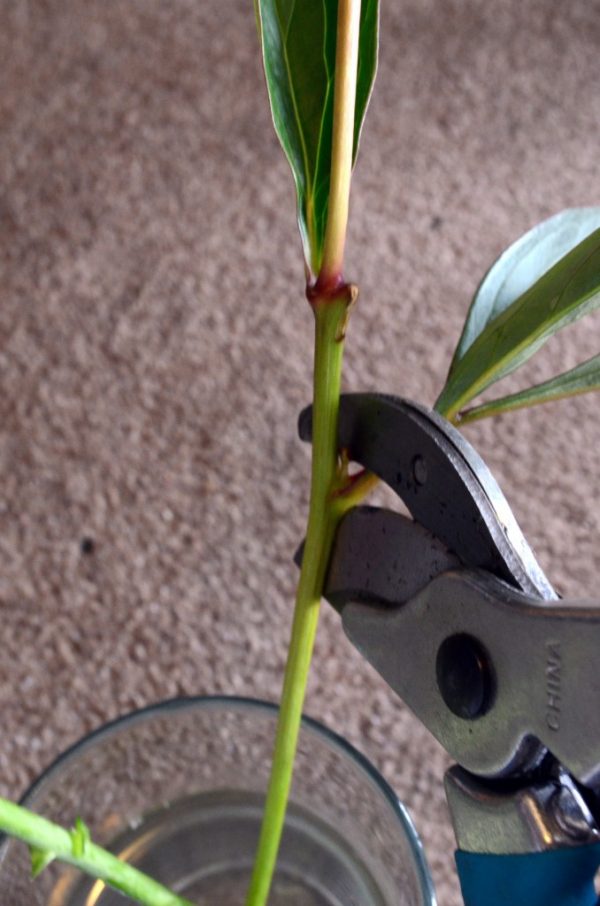 2. I chose about 3 flowers to be the base of the bouquet, arranged them in a way I liked, and then taped them with floral tape. Not too high up that it’ll be visible once the bouquet it done, but not so far down that it’s useless. Now, floral tape was not as easy to use for me as the internet had me expecting it to be. It’s supposed to wrap around and stick to itself, but it kept coming up. I’m not sure if I was doing it wrong or the tape I got was no good, but there was a learning curve for me to get it to work. 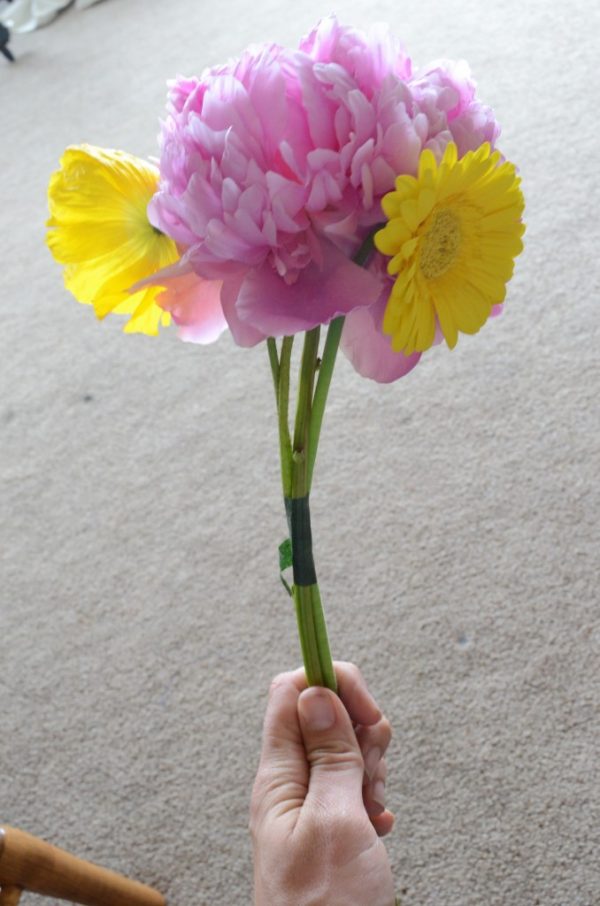 3. Then I just added flowers and greens around in a spiral in whatever way the mood struck. It was helpful to hold it out from me every couple of flowers and see which side needed another color, which side was getting too fat, etc. Once you get going it’s pretty easy to tuck flowers in here, pull flowers out there, etc. 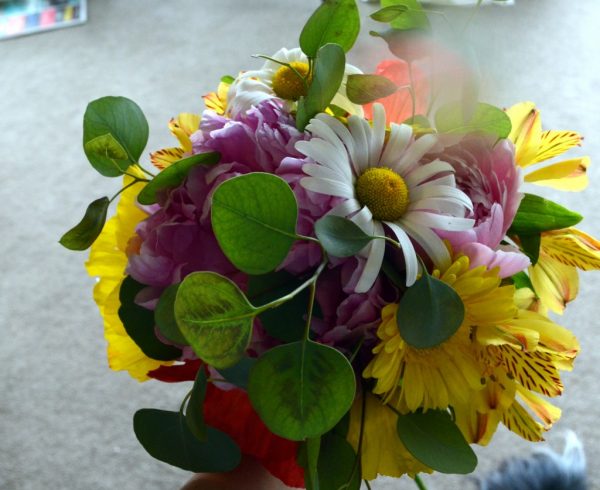 4. Once I was happy with it, I wrapped the stems with more dreaded floral tape, nice and snug. I then wrapped a ribbon around that whole thing and pinned the end with regular sewing pins, stuck in at an angle. Next time I’ll put a little less floral tape/cover it entirely. 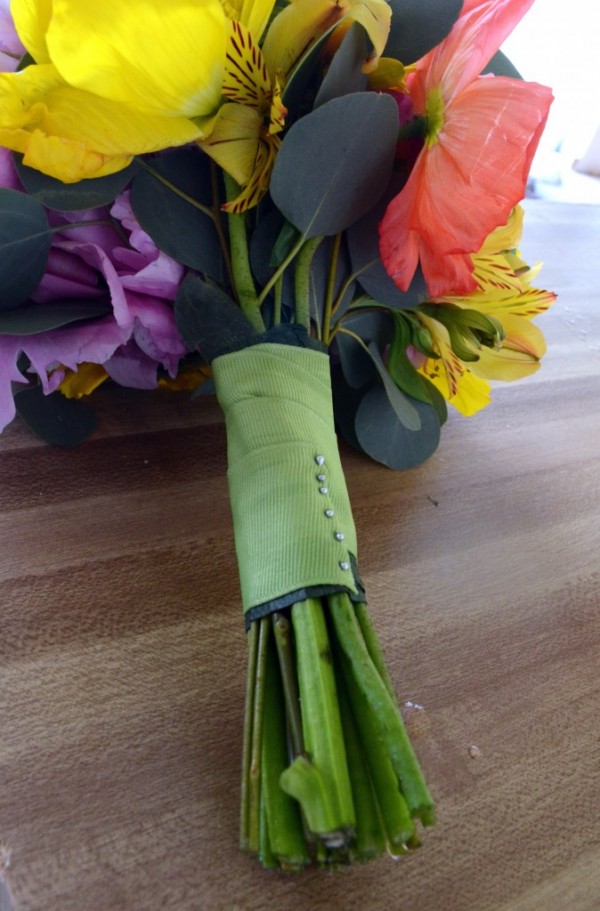 5. I cut the ends of the bouquet to be uniform and stuck it in a vase with enough water that the stems are drinking but the ribbon isn’t getting wet. I’ve heard that it’s helpful to put your flowers in the fridge, but I decided to leave my bouquets out since we won’t have access to refrigeration on the wedding weekend. I wanted to see how they’ll fare for 24 hours without refrigeration.

Overall I spent $80 and got enough flowers for 2 bouquets and enough extra to have little vases all over the house. 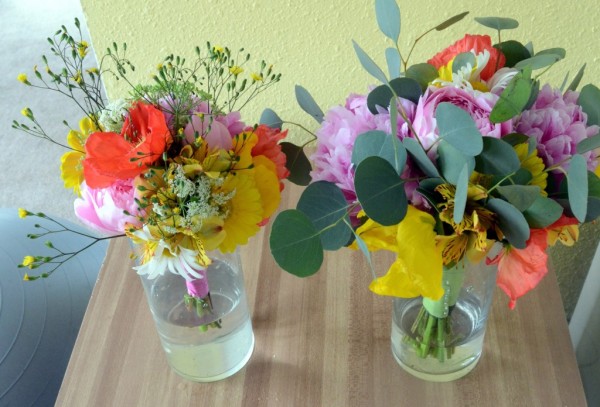