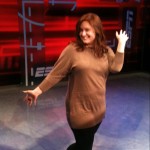 I admit it — I’m not really one to do it herself. I am not a crafty person. I am in awe of crafty people. For instance, my almost mother-in-law. If she pins something to Pinterest, she will actually make it. And make it well. She’s like a MacGyver with a sewing machine. I made a pillow once in 7th grade. Other than the occasional button-to-shirt, which always looks a little bit off after, that’s all I can handle. Generally, I am of the mindset that if I have a choice between making pad thai and ordering it from a place down the street who makes it all day long and is essentially a pad thai expert, why would I risk putting the wrong amount of Sriracha in my food and potentially making it inedible. Being a New Yorker has spoiled me a bit in that way, I suppose — when literally anything can be steps from your door, you have to be pretty motivated to DIY.

Don’t get be wrong, there are plenty of things I like to do myself — like baking. I love making cupcakes and cheesecakes to rave reviews. I do make a mean cheesecake. In fact, my fiancé’s uncle once called my cheesecake better than Junior’s. And for a New Yorker, that is a BIG deal.

But, other than my mad baker’s skills, I’m pretty limited in the DIY department. Which, as a bride looking to save some serious dough, I knew could present a problem. I’ve read enough Budget Savvy Bride to know that DIYing is key to an on-budget big-wow wedding. So early in the planning process I made a list. I asked myself, what can I reasonably do myself to save money? And of all of the offers of help I’ve received from family and friends for the wedding, I should probably cash in on some of those, huh?

I started with the things I knew I could do: the cake. Actually, the idea of making my own wedding cake seemed really fun. Sure, I was probably thinking mostly about the taste-testing at the time, but I was on board with it. Since I was leaning towards doing cupcakes rather than an all-out cake anyway (there’s always tons uneaten cake on the tables at weddings when everyone is up and enjoying the party anyway, right?), I knew I could make my own (cup)cakes at a fraction of the cost of one of the many bakeries seen on the Food Network (not that those aren’t delicious because they totally are). With a few willing extra pairs of hands and many hungry mouths to help me, I could actually DIY something!

Check out this three-tiered wedding cupcake I found on TheKitchn.com!

Making our wedding cake also goes along with our eco-friendly theme, since I can choose everything that goes into them. Not to mention that few things are truly greener than DIY. With lots of Googling, I know I’ll find a recipe that everyone will love, and a DIY project I’m actually excited to take on!

Are there any other not-so-do-it-youselfers out there? What costs are you cutting out with your (perhaps limited like mine) DIY skills?