I’m starting to stress about our $15k budget. We are funding 95% of the wedding and taking out a loan for what is basically the biggest party we’re ever going to throw for ourselves is not an option (this is not property or a business venture, and therefore it is not an investment which [in our opinion] is the only type of thing that constitutes as loan worthy). In January Japh and I both sat down and laid all of our financials out. It was terrifying but I really think it was the best move. I developed a budget and things have been going fairly smoothly since until about 3 weeks ago when I came to the conclusion that unless a major financial windfall (lottery, long lost relative inheritance) occurred, we’d be about $2k short on our final payment due to our venue. This conclusion basically turned into a panic attack. Like a real one. With tears.

Now, I’m not much of a crybaby and after a stint of blubbering we started thinking of inventive ways to cut costs (besides the normal ways to save, i.e. cutting back on extras like expensive dinners out, drinks at pricey beer gardens, etc.). Since our venue is a fixed price, nothing can be done about that, but all the other little things we could either do without or come up with less expensive options. Here are a few of the things that we have done to save money:

Japh and I have an urban farm growing on the roof of our apartment building. Well, it’s not exactly a farm (yet); we established this as a mini-business venture earlier this year called “Little Mushroom Farm”. We actually don’t grow any mushrooms, the name is a pet name Japh has had for me since we started dating — stop it, I can feel you rolling your eyes 😉  BUT we do have a sustainable organic large(ish) garden, and we’re currently growing about 9 varieties of heirloom tomatoes (Japanese Trifele, San Marzano, Roma, Tomatoberry and Black Krim to name a few), as well as other interesting produce like Merlot Peppers, Trombocino Squash, Cubano Peppers, Ping Ting Eggplants and Chocolate Habenero Peppers.

A few months back my friend Rick had a lovely simple ceremony and I really enjoyed the style of his officiant. During the party I got a chance to chat up the officiant (with obvious ulterior motives) and found out that while Will enjoys officiating, it’s not his main source of income and after a few questions to my friend I discovered that Will is very willing to take payment in the form of trade. (Sweet!) .

I sent Will a message requesting his services for November 5th and asked what he would accept as payment. He relayed that his going rate is $200. Which is not unreasonable, but for a couple of who is trying to save funds wherever possible I thought it prudent to counter with the option of trade. I will say that I threw it on a bit thick, in that I listed all the deliciousness that we are growing and hit the send button hoping that it would be enough to entice at the very least a partial interest in trade. In the end I received a message that stated “A box full of fresh local veggies?! You’ve got a deal”.

Trust me, I know this sounds silly because when Japh approached me with this concept I thought “Psssh, Ebay?”, but hear me out–for us its been a pretty sensible option. Over the past two months we’ve made $200+ in pure profit. I guess it also helps that I seem to have a lot of clothes that I pay no mind to anymore, and we price them very reasonably. At the rate we’re going, we should bank another $400 (for a grand total of $600) that will be put towards our wedding efforts.

While it is hard to judge if you’ve found a good seller or not (open communication is key) Ebay is a wonderful resource. It does take a fair amount of research and stalking but I was able to get Japh’s suit, as well as one for my Brother and one for the Best Man for about $150 a piece. We went for a vintage theme and the fellas will be wearing 3-piece corduroy mod-style suits in different shades of brown:

Design your own stationary (and print it at work, if possible)

Japh is a Photoshop wiz. He first showed off his skills to me when we decided this past Christmas to send out joint cards:

For our Save the Dates we stole an idea straight from here, but you know, imitation is the sincerest form of flattery. Japh created the JPEG file and I worked out the formatting details in Microsoft Publisher. They turned out pretty nicely (though, I’m pretty sure that only a handful of our guests got the reference of it being an original Penguin Classics book cover — such is life, not everyone can be a lit nerd). 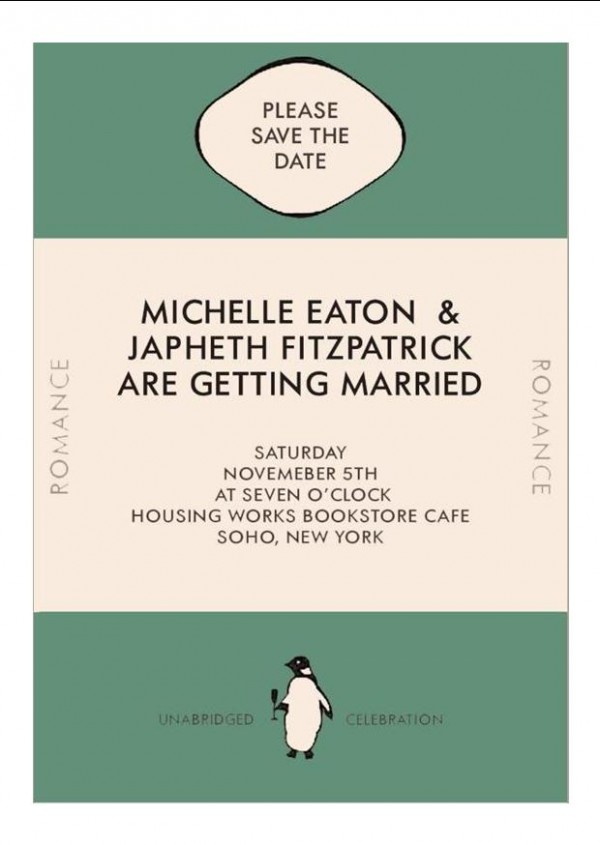 Presently we are working on the final stages of our formal invites, but I will say that library card return cards will be involved to keep with our literary theme. Onto cost savings — printing your own stationary can save you a damn bundle if you have resources that you can exploit. OK, so maybe this is slightly questionable when it comes to business ethics but you know what? We’ve got a wedding to pay for and I’ll use every resource that I have (also, it doesn’t hurt that my boss is completely OK with me using the terrific commercial grade office printer).

The Save the Dates cost us a total of $12.00 (for postage)! Saving us approximately $125.00 (this is based on checking around etsy.com to see what the going rate for a professional to handle the printing and formatting for us — typically vendors were selling them for around $2.50 per postcard).

Not including the money we’ve saved from DIY projects (tutorials of which for crepe paper flower garlands, birdcage veil, tree branch centerpieces, photobooth, bouquets  and more will be coming soon) so far our creative efforts have saved us approximately $500, not including the extra monies that we’ve been making on ebay 🙂  I’m still a little concerned with making it all work but I feel much better after working out creative ways to save with Japh.