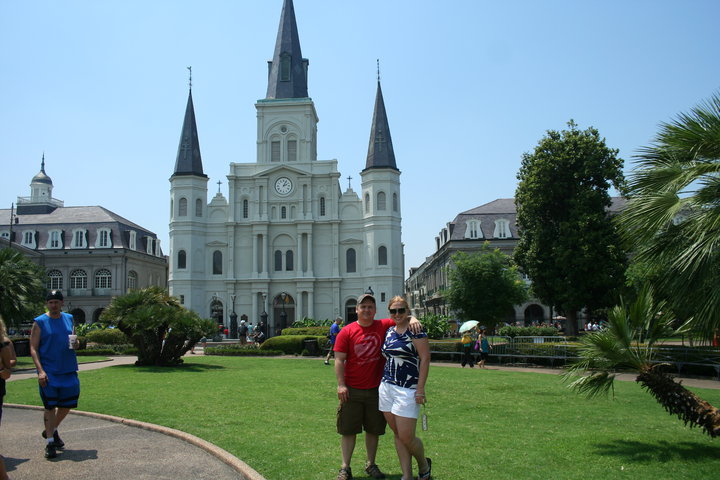 Hello BSB readers!  My name is Heather and I am one of the lucky new bride bloggers.  I am pretty excited because, like many of you, I am on a tight and tiny budget and I turn to the blogging world for ideas.

A little about me I suppose.  I am 28 and live in the great city of Atlanta (or really the metro area, but who is keeping track).  I grew up in Chicago but after living in Georgia for 14 years, I consider the south my home.  I currently work for a company that produces tradeshows all around the country, so I am pretty well versed in event planning.  Who knew planning your OWN event with your OWN money would be much harder!!
My fiance’s name is Matt and he is 31.  Originally he is from south Florida, but moved to Georgia for college.  He is pretty awesome in my book.  He is your typical sports loving guy who is a die hard Miami Dolphins fan, regardless of how they are playing (or not playing, he has had some rough seasons to deal with).
How we met: We both went to the same college, University of Georgia (Go Dawgs!) and worked at the same job, but never really crossed paths.  One night a friend invited us over to Matt and his roommate’s house.  I was still new to this group and had no idea who anyone was, so why not hang out at a stranger’s house?  Oh college!  That night I was introduced not only to Matt, but to a majority of my best college friends.  From then on we all hung out every single weekend that year (not including seeing each other at work during the week).

How it happened: In late summer of 2005 we all learned after graduation, Matt was joining the Army.  Suddenly one day while we were all together I realized I couldnt let that kid get away.  It was a strange feeling and I soon became the pursuer.  A few weeks later we started dating and havent looked back.

After eight years of dating, he asked me to marry him.  I was (and still am) so happy.  Its funny how compatible we are, we are completely the same but total opposites (I like to sing and dance to pop songs, he listens to talk radio; I am a crafter/blog reader he is a gadget/news junkie), but he will always be my best friend.  And never fear, the Olive Theory holds true in our relationship.

Now we are on this crazy wedding planning journey and I am so happy to have the opportunity to share it with you all.