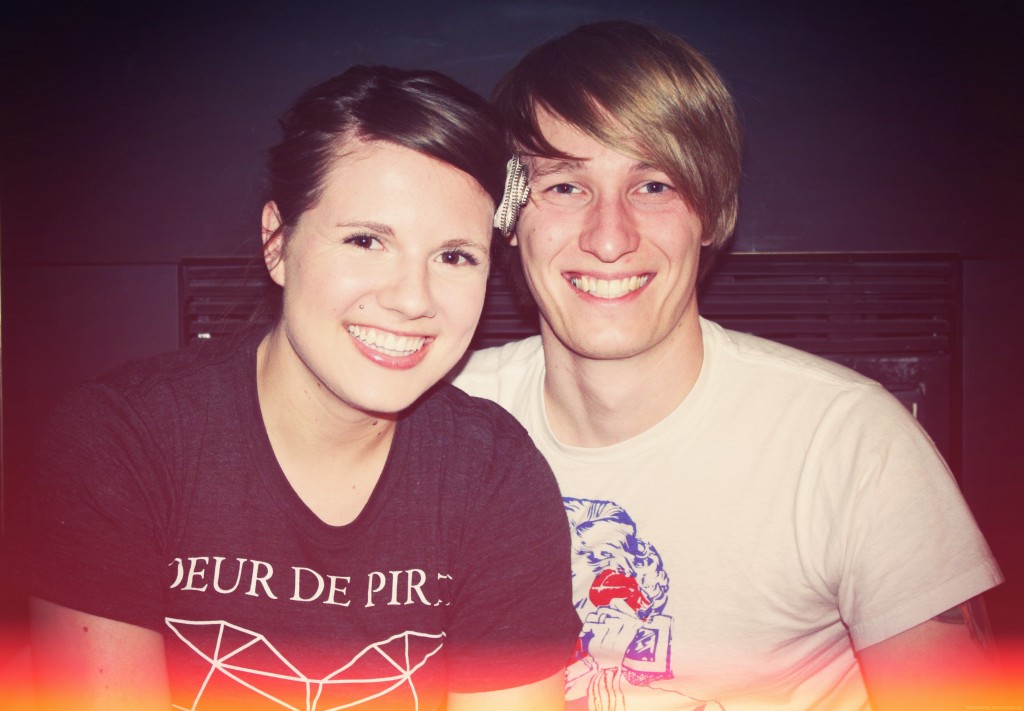 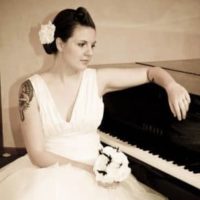 Sorry for the absence yesterday folks, I’ve been busy coding away in anticipation for our new bride bloggers! Today marks the start of the blogger introductions— I will start with the lovely lady who has the closest wedding date: Lesley! I was really impressed with Lesley’s creative abilities and thought she’d be a great fit for BSB! She plans to have a vintage rock’n’roll wedding on New Year’s Eve (so fun!) for 300 guests on a $6,000 budget! I can’t wait to follow her journey to see how she pulls it off! Everyone welcome our new bride blogger Lesley!

Lesley here, one of your friendly new guest bloggers. I’m so excited to be able to share with you all the wicked awesome fun of planning my kinda large wedding on a not-so-large budget! I’m 26 years old, and although I’m from Toronto, Canada, I currently live in northern Minnesota with my fiance’s parents. (I moved from a city of 2.5 million to a town of 1700 people – now that’s love!) 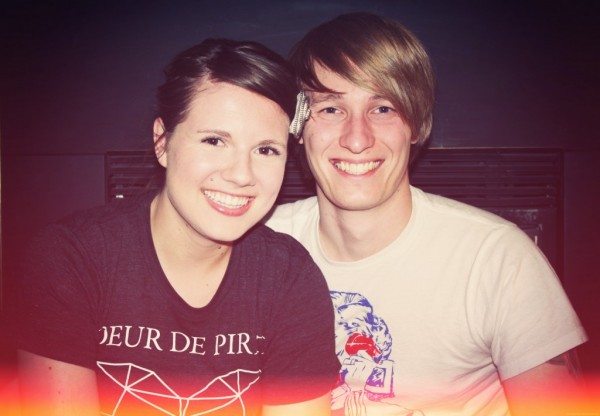 I’m an interior designer and artist by trade (you can check out my website here ), but I also have a super love for music and ministry and just spent the last year traveling all over Canada, the USA, and Taiwan with CTI Music Ministries as a vocalist. My fiance Nate and I actually met through CTI – he was a guitarist on a team the year before I joined. Not long after he finished his one-year commitment with CTI I started mine, and my second stop on tour was Nate’s hometown. This was September 2009, and at the time I was not looking for a relationship. I had just committed myself to a year of ministry and a boyfriend was not on the agenda! However, I knew right away after meeting him that he was something special, and I tried SO HARD that weekend to be subtle about it and “play it cool”. (Note to self: you are REALLY BAD at playing it cool! Eek.)

Two days later my team left town to continue on tour; and by that day I knew that day that I loved Nate and would marry him. I just KNEW. (I mean, come on…an incredibly talented, good-looking, kinda badass tattooed Christian musician with a huge heart for God and for others is not someone you meet everyday!) I never thought I would find someone so much like me, with the same silly quirks and passions and goals. It was so crazy how God orchestrated the whole thing, and I was so thankful for it! But this is where it got tough for us. I had just met the guy that I wanted to spend the rest of my life with, and I knew I wouldn’t see him again until I had a break at Christmas – almost 4 months later! And after Christmas, it would be 3 months until I saw him again. And after that – another 4 months until my year with CTI ended. Nate and I started a relationship knowing that we would only see each other a couple of times in the next year. And during that looong wait, Nate couldn’t be my first priority – my ministry with CTI was. Crazy? Yes! Worth it? Absolutely. If I learned one thing this past year, it’s that anything worth having is worth waiting for. And trust me, when you meet the boy of your dreams, he is ABSOLUTELY worth waiting for. 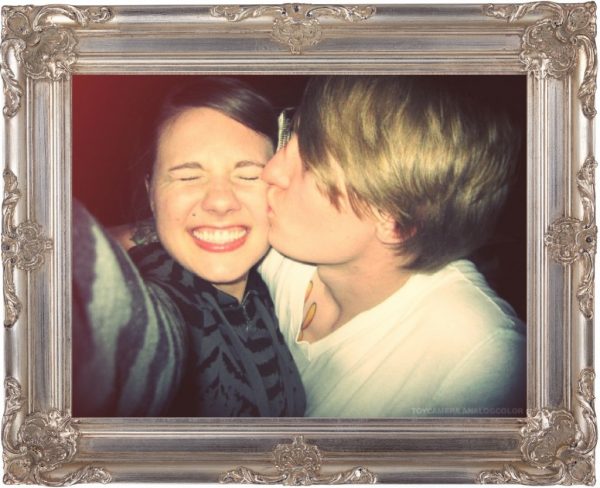 So now, in September 2010, we’re at the end of that year. And after waiting patiently we’re finally together! I moved in with his family at the end of July, and we got engaged in early August at his favorite place in the world – his family’s cabin on the lake. After the 3 hour drive, we got out of the car and immediately went for a walk to his favorite spot on the waterfront. We had both been waiting for this for months – and he didn’t waste any time once we got there! In the most adorable and sincere way, in a place that meant so much to him, with a girl that meant so much to him (hehe!), and without any big production, he got down on one knee and asked me to marry him. Sweet, sincere, and simple. And after I practically tackled him with hugs and squealed with excitement, I said yes!

We’re getting married this December 31st – New Year’s Eve! Our engagement will be less than 5 months, but we’ve been brainstorming since last winter and things are coming together really well so far. Because Nate has a big family, and we’re getting married at his church where just about everybody will show up, it looks like it’s going to be a pretty large wedding – about 300 people. (We’ve invited a lot more than that, but since so many people will be coming from out of town, and it’s the MIDDLE OF WINTER, we’re not sure how many will actually make the snowy trek to Minnesota.) Our budget is $6000, which is pretty tight for a wedding this size, but we’re forgoing the traditional dinner and just having a nighttime wedding and dessert reception/New Year’s celebration. And honestly, I’m excited for the challenge of keeping within the budget! Neither Nate or I want to have wedding debt, but we also want the day to be really special and unique, so it’s pushing me to use my creative muscles to come up with impactful DIY ideas for our “eclectic vintage rock ‘n roll” wedding. BSB has given me so much inspiration thus far, and I’m looking forward to sharing the planning process and the big day with you!