I swear I have the world’s most amazing maids and I decided to have multiple maids of honor, and not just one MOH. It might be different if I had a sister or something, but I do not and all of these girls are equally important to me! I could NOT pick just one. The maids have been so amazingly helpful and wonderful!

It was not tough to pick the maids, but it was also not without drama. I considered not even blogging about this, but I figure that if I had the issue, others do too so it’s worth sharing. The issue was that I am slated to be a bridesmaid in some other weddings, and have been a bridesmaid in other people’s weddings that are not going to be my bridesmaids. The problem was I did not want a HUGE bridal party. This caused a little bit of drama with one girl, but with all the other friends who I had been a bridesmaid for –  they didn’t really care. Actually, most were happy to get to just attend the wedding without any responsibilities.

See, the thing is that it was not that I do not love those people any less or my bridesmaids anymore. I love all of my dear friends all for different reasons. The girls who I chose for bridesmaids are wonderful woman who have been my support throughout life and the last three years. They are a part of dear-husband-to-be and I’s relationship, in one way or another. Three are best friends from before I was in high school, two of which my entire family considers the girls and their families to be a part of our “tribe”. They may not be family by blood, but gosh darn it just try to tell us they aren’t family and we’ll tell you what’s what! Two are friends from college, woman who have known my love and I and were the people who had to hear every detail of our relationship (from before it was a relationship) and (before my love came along) got me through break-ups, hard times, and the general awkwardness that can happen as a college student. They have unfailingly and unselfishly been a part of my life, just as I think they will say I have been in theirs.

So basically, what I am saying is, do not let anyone tell you or pressure you into what you SHOULD do with your bridal party.If anyone has the nerve to tell you they thought they should have been a bridesmaid, stay calm and take the high road. Explain that you value your friendship very much but you and your partner had made your decisions about your bridal party and they should be respected. For me, I knew when I got engaged I wanted those five girls standing next to me. How did I know? Because they were the first people I wanted to tell when I got engaged (Hell, I called one of them the day I got engaged because I had a hunch and I wanted her to talk me out of it!). So the only thing that would have changed who those lady’s were, was them declining my request. And possibly my mother. She has some pretty big sway.

So, the bridesmaids were not hard to figure out. But, the maids dresses were tough to pick. I mean, you have these women who you adore, who have stood by you and been such an important part of your life and you want to make them look like the beautiful women they are! But, finding a dress that everyone likes, that everyone looks good in – well, it’s awful hard.

I had originally though I would go the route of letting them pick a dress. I love the way it looks put together but interesting, plus it was less work for me (Ok, so selfish but I got lots to worry about right?)

But, after discussing with a couple of my ladies who said they would rather just be told what to get I scratched that. I also had a fear that even if I told them to get “blue” dresses, they would all end up with shades that were just different enough to look weird and not the “mismatched chic” that I hoped for. Although I hate “match-y,” I hate “off” and “clash” even more.

So, then I thought, different dresses but same color. However, then I was worried about what if two picked the same dress and then it looked like for some reason I made those two wear the same. (Gosh, I was worrying about this wayy more than necessary!) I figured the easiest way to do this would also be using dresses from someplace like David’s, but I did not really like any of their dresses that much and they didn’t have much choice in the color I wanted. Plus, I wanted a fabric that wasn’t so …. “bridesmaid.” You know what I mean? Usually, with a bridesmaid dress, you can just TELL it was a bridesmaid dress if anyone actually does find a reason to wear it again. It just has that certain crunch of taffeta or slightly over-lustrous satin fabric that screams “BRIDESMAID!”

Then I saw this: 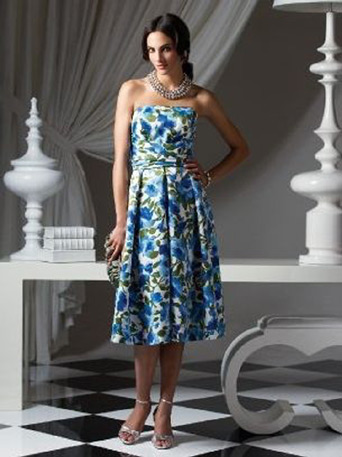 I love print. I mean, we are having a Derby-themed wedding, what is more “Derby” than a floral print dress? But, I was very concerned that my maids wouldn’t like the print. I mean, ask my grandma she says I love anything with a wild print (which is not EXACTLY true!) and I realize that not everyone loves a print as much as me. But, the maids all seemed ok with the print, so I had thought we might go with that beautiful little number from Dessy.

I ended up totally finding the bridesmaid dress by chance though. It just proves that seeing something in person can have so much more of an effect. So, as we were shopping for my dress we saw this dress with a similar shape to the one I had said I liked. It was also a print, so we thought, we’ll see what it looks like on. I had two of my maids with me that day and they were very different body types, so I figured it would be a good way to test out the shape of the dress. 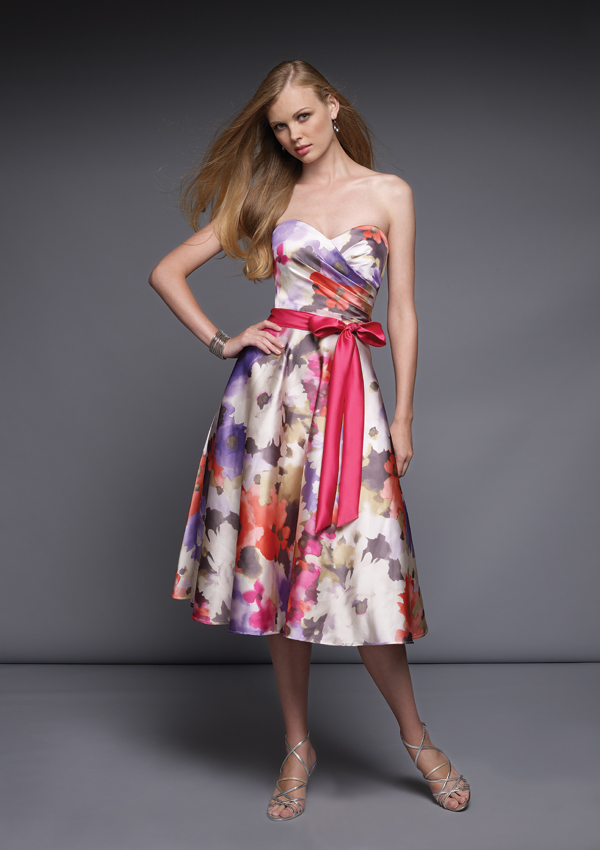 I ended up LOVING this dress. LOVE. The print doesn’t EXACTLY go with our colors but I do not even care. It’s such a gorgeous thing and my maids all said they think they will wear it again (which I know, we all say that and we don’t usually but..). It is a really lightweight fabric, a twirly dress as one maid said, and will be comfortable. One of my maids did say she wished it wasn’t strapless, but I think we will just have straps added to it if she doesn’t feel like it gives her enough support. My mom already said she would be willing to add straps to the dress of whoever wants them (it’s so nice having a mom that is handy with a needle and thread!). And the best part, the bridal salon where I ordered my dress (which has some of the most AMAZING consultants ever!) had an anniversary sale, which all the bridesmaids go to take advantage of and got their dresses 20% off! Score! They’re all ordered and I have to say I am even a little jealous and kind of want to buy one for myself to wear!!

If just everything was as easy, as what our ‘maids take care of for us!!