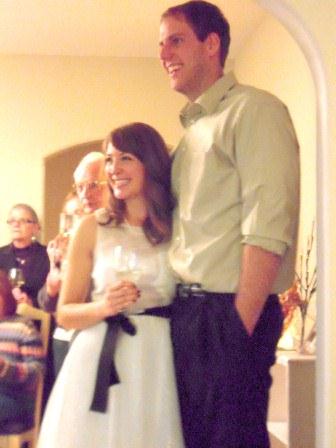 Our biggest argument over our wedding happened early on. We still don’t agree.

My mother had given me permission years ago to elope. It is cheaper. I do not come from a family where elaborate, large weddings are the norm. One cousin had a Halloween reception and the ceremony was at the courthouse the day before. It was basically just a large Halloween party, costumes and all, for mostly friends.  Another cousin married in a lighthouse and less than 10 people were invited. This is what I’m used to.

So when Dear Fiance Dane told me we should be looking for venues that would hold 150 to 200, I gasped. I just couldn’t wrap my mind around having that many people or asking my parents to pay for that many people.

When we chose our venue, it worked out in my favor. I’m not going to lie about it. The historic hotel was beautiful, full of character, budget-savvy and would hold 100 people tops. By going with this choice, we cut down our guest list in one fell swoop.  For his sake, I did ask what fire code was, just in case we could squish in a few more if needed.

Now, one of the best things about my fiancé is his large family. And, they’re all close. My mom is the youngest of seven, but my side of the family just isn’t close. We began the guest list process by listing all of his grandparents, aunts, uncles and cousins he HAD to have on the list. It was very daunting compared to my little list.

My mother had a great idea. We’re having an evening wedding and little kids will get tired likely soon after our ceremony. She and I decided we could get more second cousins and friends on our guest list if we had a kids party at a different location and hired sitters. That way, moms and dads could party late into the evening with us and we could invite more adult family members and friends. Doing this, we managed to each get about five friends on the list (outside of our small bridal party).

Now, I can’t recommend the idea of a kid’s party to everyone. Luckily, we’re behind it 100 percent and most of our family members are too. However, some people are sad their kids will have to miss out on the party. It just worked well for us in this situation and we’re sticking to our guns.

After a couple of months of looking at venues and deciding on the kids party, we got our guest list down to 114. Everyone says that 20 percent is expected not to show. And we’re counting on some of our older relatives not traveling because it will be winter. I’m anticipating that we’ll be about 80 people, which should be very comfortable in our space.

Most of all, I’m happy that I will know every person who walks through the hotel door on Dec. 15. I won’t have to try to remember that one time meeting that long-lost cousin when I was three, or kind of knowing my mom’s friend from college. Everyone in our families has been great about keeping our guest list short and not squawking about inviting this person and not the other.

In marriage counseling, we took a survey and both admitted we do not agree on the kind of wedding we want to have. I’m sure our pastor raised his eyebrows at that one. We explained our differences in our dreams and he wasn’t too worried about what we’ve come up with. He reminded us that as long as we had a ceremony where we declared our love and devotion to one another before God and our families we’d be golden. We have made compromises. And at the end of the day, we’ll still be married and we’ll be partying down with those who are closest to us.