Much has transpired since my last post to BSB. Addison and I made our little arrangement public when… he put a ring on it!

We will get to the official engagement and the story behind that ring-a-ling-a-ding-dong, a little later. But first—I want to talk about the barriers we had to break through before we could go public with our plans!

You may remember from my first post, that my Fiance and I knew we would be getting married pretty quickly once we began dating, and we decided to set a date as soon as we could. You may also remember, that our biggest road block in having any semblance of a normal engagement announcement was the fact that we had been hiding our relationship from our coworkers.

Although I initially resisted the obvious attraction that existed between Addison and I, working in the same department for a few months definitely pushed our relationship from friendship to companionship. Oh sure, our boss was onto us—he knew there was something brewing, but we kept things professional for the sake of the jobs we valued so much. We managed to keep all longing-glances, under-the-table hand-holding and overall nepotism aside while in workplace. Sometimes I would catch myself calling Addison pet names and perhaps the giggling would get a little out of control so the only way to keep my relationship from becoming fodder for office gossip was to focus on my work. I so badly wanted to tell everyone the good news about us, but Addison had his heart set on waiting until he put a ring on my finger to make the grand announcement.

The first people we told that marriage was imminent were our families and closest friends, of course. Mom and I started making plans immediately, and she insisted we take a diamond ring that was handed down to her from my grandmother to use for our engagement. I wouldn’t have been comfortable with Addison taking on any debt to purchase one of those giant cushion halo rings that girls lust after these days and bling just isn’t my style. I also have a huge issue with modern diamond sourcing and the manner in which diamonds and gold are procured. Beyond the violent conflicts motivated by diamond mining, there are very serious environmental repercussions that go along with gold mining. I may not be picky about the cut and style of my engagement ring, but convenient big name diamond resellers were simply out of the question for my poor beau! We were very lucky in that we had a diamond literally handed to us and what’s even better is that the ring has a history in my family.

What I never expected out of this was a formal proposal–I already told the guy I would marry him! But he’s got a sentimental heart, and he got down on one knee in the courtyard of my apartment, where we had our first kiss, and sealed the deal with that heirloom ring.

With a ring on my finger, I was ready to shout the news from the rooftops of Dallas—but I resisted. The next day we took our boss to dinner and shocked him with the news. He was stunned–in the best way possible! He almost choked on his pad thai when he realized that it wasn't a joke. Luckily he was genuinely happy for us and suggested we make a funny video announcement to put up on all the digital messaging screens throughout the office. Instead, we did something that would be sure to get the word out to friends and coworkers in a swift and effortless manner. We went Facebook official. And it worked. Within minutes I had texts from old friends I hadn’t spoken to in years congratulating me, and a few coworkers who were dying to know if this was just another one of our office pranks.

The next morning I walked into the office and was immediately bombarded with questions and congratulations from people who definitely weren’t Facebook friends of mine! Proof that gossip in the office spreads like wildfire and that keeping our relationship under wraps until our engagement became official was the right move. Now we only have to endure wedding talk for two months—if I can get through that, I am certain that an office marriage will be a piece of cake!

Using Facebook as our method of making an engagement announcement may have been a little cheeky, I’ll admit, but I must say it was super efficient. If you want to cut costs of putting out an announcement, definitely consider social media as an alternative. That is, after you’ve called any tech-challenged family members you may have. 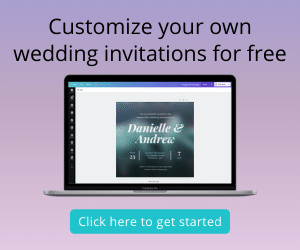 New Customers Only! Get 20% Off Your Order from Minted with our exclusive code. Use our code to save big on save the dates, wedding invitations, thank you cards, day-of wedding stationery and more!