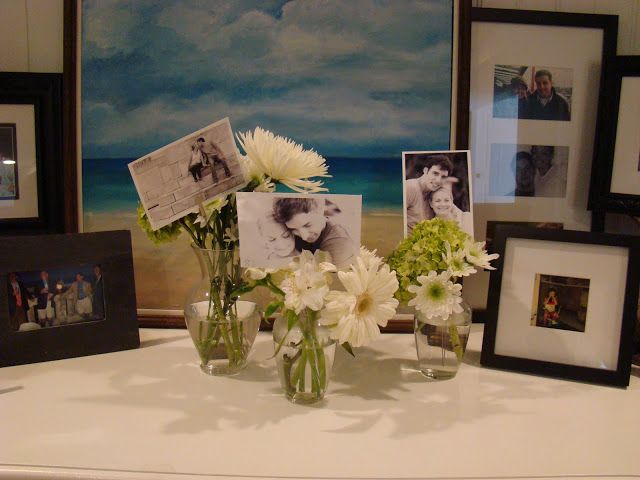 A few weeks ago, my sister and bridesmaids threw an amazing bridal shower for me at my sister’s house. The shower felt like something out of a magazine, no detail was left out and it felt like a day that was all about me. I am not the biggest fan of being the center of attention, so I was very nervous about the shower in general. I also do not like opening gifts in front of people, Nick joked that I should practice opening presents with him 🙂 The shower was a lot of fun, it was a great opportunity for my family and Nick’s family to get to know each other better and for my friends to also meet some people from Nick’s family. Even though I was the center of attention, it was very relaxed. There were no games, just good food and drinks, conversation and gifts. Some of the details my sister included were very sweet. First, she printed a few of our engagement photos and other pictures of us and had them in bud vases around the party. She also made this super cute banner that said Future Mrs. H. It was very cute and Pinterest inspired.

We moved downstairs to open gifts and my brother-in-law had written a cute little poem for me on their chalkboard wall. It was a nice simple touch that made me feel, again, like the day was all about me – even if I didn’t want all of the attention on me. There was a signature drink, a Jon Daly – lemonade and sweet tea vodka. The food was great, salads, cheese & crackers, sandwiches and empanadas! It was a good spread for sharing and moving and talking to the guests.

One nice touch that I appreciated was that all of the food was labeled. I am a picky eater and we know food allergies are more prevalent. My sister had simple little signs for the food to tell you what everything was. She just put them on some scrapbook paper and folded them and put them near the food so everything could be easily identified by the guests. I’m sure this was also helpful to my sister because she wasn’t being asked the whole time what things were.

Here is a photo of me and my beautiful bridesmaids, it was such a fun time and I appreciated all the little touches they put together to make the shower so special. My guests are still telling me how beautiful everything was and how it was so comfortable.

The favors for the guests were super cute cupcakes from Georgetown Cupcake (home of the DC Cupcakes show on TLC). They were all fun flavors and on top was a little fondant circle with our monogram on it. Unfortunately, I didn’t snap a picture of any cupcakes before they were eaten! So you get to see the boxes only (sorry!).

Here I am at the end of the shower with my bow bouquet! I did not break any bows, though Nick and I do want kids eventually. Nick thought it was a pretty silly superstition when I was explaining it to him.

After the shower, I had my bachelorette party, I’ll share that story with you another time! It was a blast!!

Did your bridal shower have a theme? Did you have fun? What did you love about your shower? Anything you didn’t like or would go back and change now?