Stag and Doe; A Wedding Fundraiser 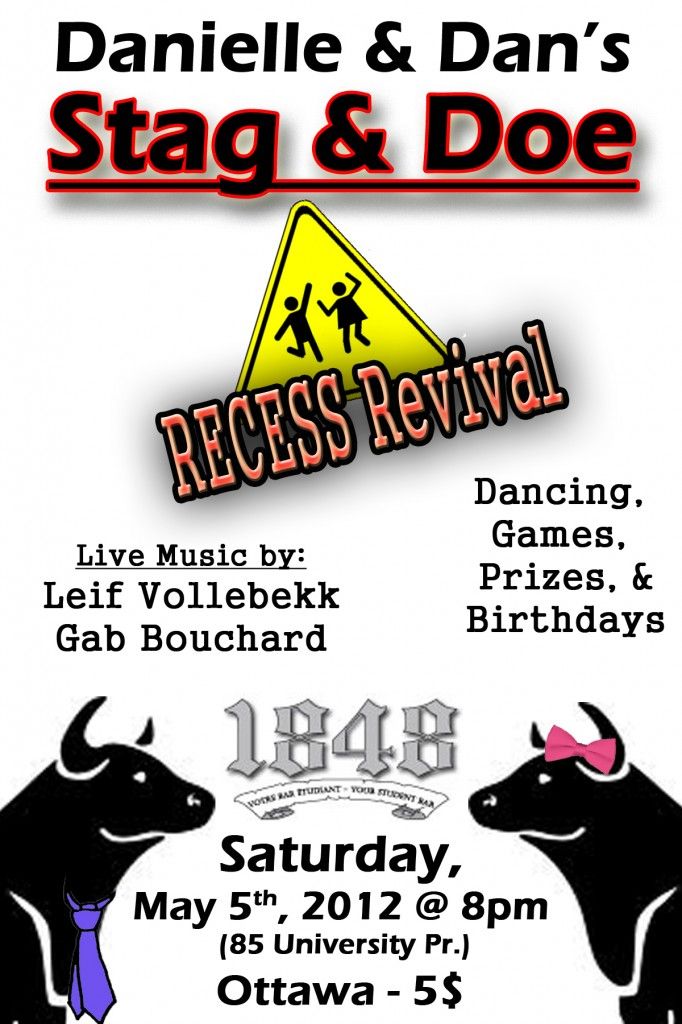 Given we want to be as budget savvy as possible, we decided to have a Stag and Doe to help with the cost of our wedding!

For those of you who aren’t familiar with the concept, a Stag and Doe (aka a Jack and Jill, a Stag and Hen, a Buck and Doe) is a wedding fundraiser. These are super popular in small towns in Ontario, but some of my friends from other parts of the country hadn’t heard of the concept. Some people also find Stag and Does to be controversial. Sometimes you get snarky comments about etiquette/why-should-I-pay-for-your-wedding and such. If you feel that way, then don’t have a Stag and Doe or don’t attend one. Simple.

We decided to have a Stag and Doe for a few reasons:

1) We’re paying for the wedding ourselves. While my parents have offered some money, we don’t want to have to use it. They need it as much as we do.

2) We held it around our birthdays (which are just nine days apart). We figured we would have organized a b-day party anyways, and rather than some random business/bar reaping all the benefits, why not us?

3) Dan and I were university event planners–pub night fundraisers are kind of our specialty.

While it used to be customary for  others (i.e.: wedding party, parents, etc.) to throw the Stag and Doe for the couple, we were involved in the planning and execution of our Stag and Doe. My parents found this to be odd, and it caused a bit of further controversy. The way we saw it, we didn’t feel it was fair to ask our wedding party to just do everything while we sat around. It was very much a team effort! We organized the core logistics, and the wedding party sold tickets in advance and ran games/stations that night. Call us tacky if you want–I think it’ 2012 and people need to move on and realize weddings are very different than fifty years ago.

I think the reason Stag and Does can be controversial is that sometimes they really do feel like a cash grab. Sometimes tickets are over-priced and once you get there, you can feel a bit bombarded to play games and spend, spend, spend. I’ve been to some that are held in a big community center, where there is an MC leading games that all cost money to enter, and that’s kind of all there is to do other than drink and chat with people. We did not want our guests to feel this way.

Our mission was simple: throw a fun party where people are entertained and feel like they’re getting value for their contribution.

Here’s how we did it:

– The venue was nostalgic. I spent my university days tending the bar at our local uOttawa campus bar, 1848. I was blessed enough to work the busiest night of the week, formerly known as Wednesday Night Recess. It was the place to be, and our university friends spent tons of time there. We dubbed our Stag and Doe “D & D’s Recess Revival Stag and Doe”. People were psyched to return to our old university stomping-grounds and have a mini-reunion! Since the academic semester is over, we had the bar to ourselves. Also, the venue was FREE since the business took in the bar sales.

– We got tons of door prizes for free. We contacted all the local radio stations for free swag, and every single one of them gave us something–CDs, t-shirts, water bottles, etc. We also contacted the local beer reps, who gave us glassware, t-shirts, hats, coasters, and general beer swag. We also had a few friends who got donations from friends of theirs and businesses they work at. We even managed to get an XBOX Live Starter kit from a friend of mine who reps for Microsoft. I couldn’t believe how generous and amazing people were!

– We charged $5 for tickets, but made sure people felt like they were getting something for the entry cost. The $5 ticket included the chance to win a ton of sweet door prizes (listed above) and live entertainment. Two of our amazing friends, Gabriel Bouchard and Leif Vollebekk played live music for us. $5 is nothing to see these two fabulous Canadian musicians perform!

– We set-up non-game oriented fundraising. The bar gave us a $1 kick back on all draught beer sales. They also gave us all the money from the Foosball table. Also, we supplied all the food and took in the profits from that. We kept it simple with chips and salsa, hummus and veggies, and grilled cheese since it was just late-night food. This way, people were “donating” without feeling like they were being harassed for money.

– We kept the games to a minimum and the prizes big. We only ran three games: classic 50/50, Ping Pong Poker, and Messy Dan.

We spent about $250 to prepare the event. This was mostly on food (chips, salsa, hummus, grilled cheese makings, etc.), Messy Dan supplies, and small supplies (raffle tickets, balloons, etc.). We made $1250 that night. Therefore, for one night of partying, we made $1000! This is a huge help towards our budget and so many people told us what a great night they had. My advice is, if you choose to have a Stag and Doe, focus on the entertainment/fun of the event, and the funds will come in naturally.