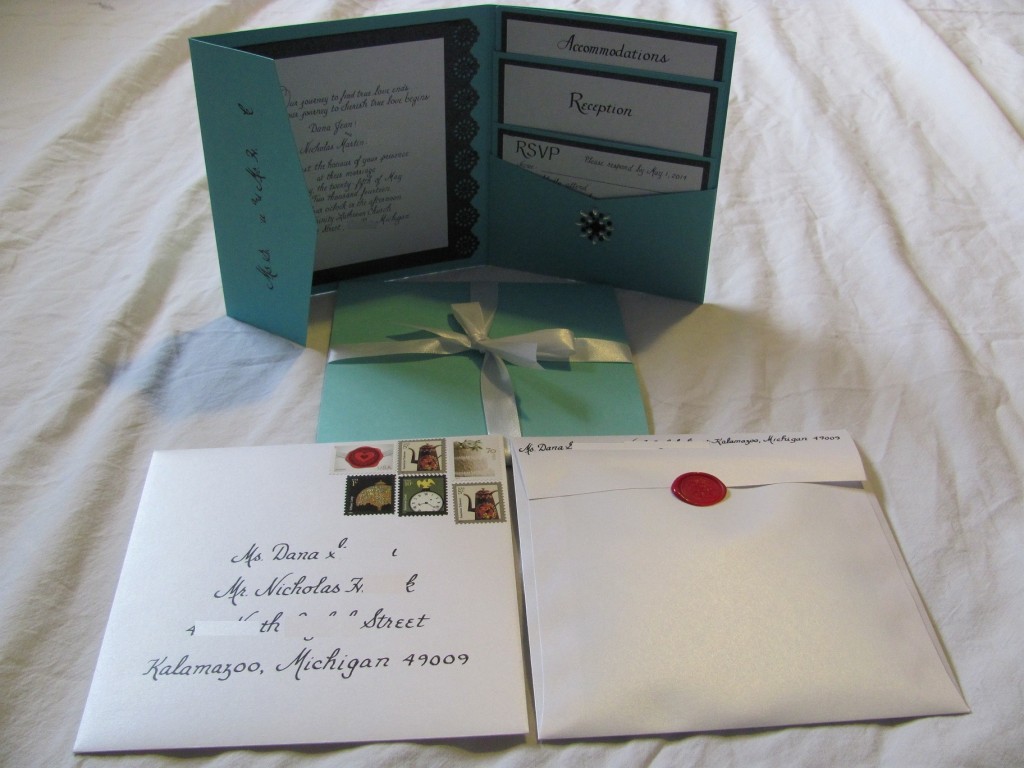 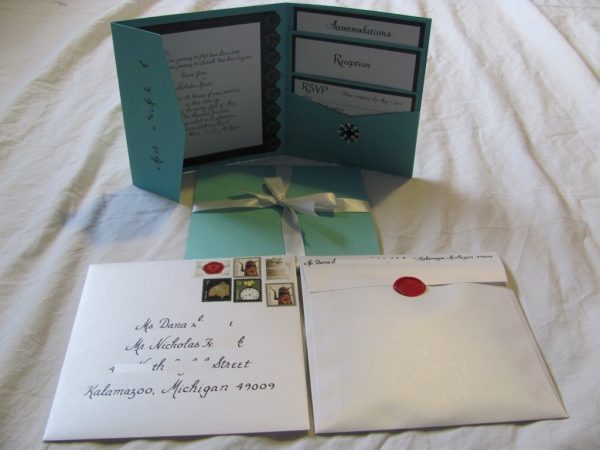 There are so many gorgeous invitations designs out there and choosing just one can feel overwhelming.  I wanted something that somewhat matched my wedding colors which are black & white, but also reflected my fiancé and I as a couple. After scouring Pinterest for months without anything that screamed ‘us’  we and I finally decided to try for Tiffany & Co. inspired invites. I had a random idea one afternoon for the signature blue box design and sure enough, after a quick Google search I found similar inspiration in what I had envisioned!  I also have to note, while the wax seal was an added expense, it was something Nick, who is a Game of Thrones Fan, was set we included on the invites after seeing them use wax seals on the show! 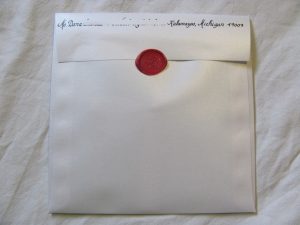 Before I share the cost breakdown for our Tiffany Inspired Wedding Invitations, I want to state that for me, being Budget Savvy isn’t about finding the cheapest option available, but finding what you like, and making your dollar stretch the farthest. While there are so many great options out there for less, we wanted the Tiffany Box theme and unfortunately that meant spending extra. In my shopping adventures, I’ve stumbled across some very nice print-at-home box sets on clearance at Staples where we could have spent $3 on a set of 50 invites!  (Just for the record, I did snag a few of these sets to be able to print my programs and rehearsal dinner invites on! 😉 )

Tweet: Being #budgetsavvy isn’t about finding the cheapest option, it’s about stretching your dollars to accommodate your tastes. -@savvybride

I’m going to break my invitations into two posts, with this being the first post with a cost breakdown and material list. Next week I’ll include dimensions and assembly for the sets.

So, back to our Tiffany & Co. invites.  I did some thorough investigation before committing to paper and found the site, http://www.paperandmore.com/, offered very competitive prices. Shipping is a flat $3.99 on any orders over $15 which I feel is a fair deal.

One tip I highly suggest before committing to your stationary head on is to order samples. PaperandMore will sell individual samples of paper products which run roughly .50-$1.00 per item and shipping is a flat $1 for as many samples as you like. This way, you can test out different colors and layouts. Starting out, I committed $10 to ordering samples which really isn’t that much in comparison to what I could have ordered on a whim, then changed my mind about (Which, I admit I did!).

For my Tiffany inspired wedding invitations suites, here is the following break down:

Accommodations card (Only sent to out of state guests) 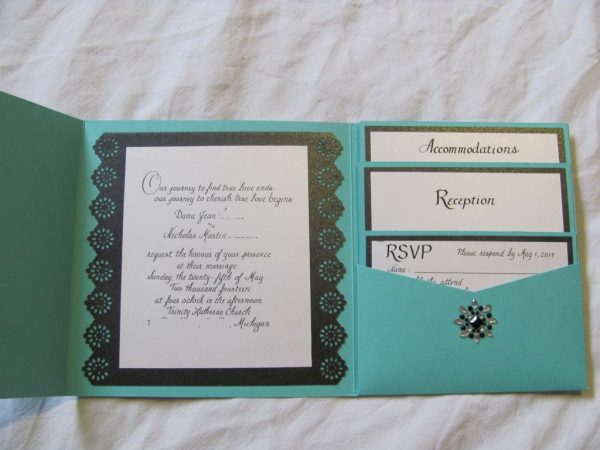 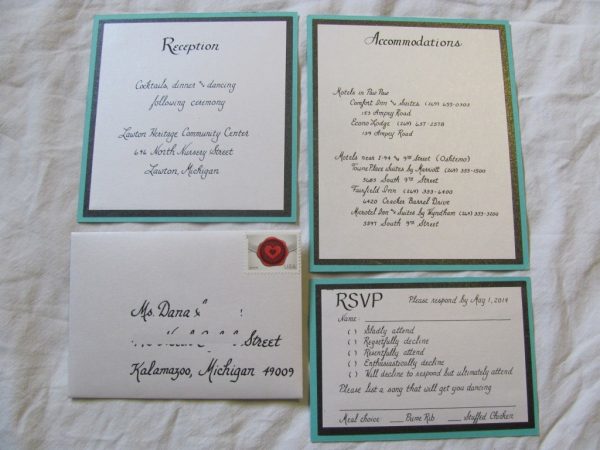 To create 70 invites I ordered the following: 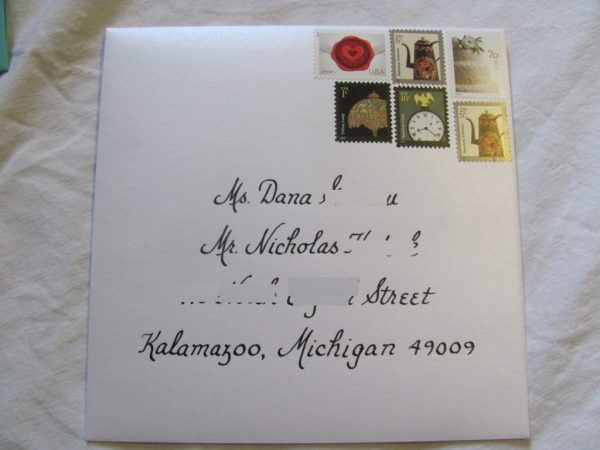 According to The Invitation Blog, back in 2011 the average couple spends $659 on invites BEFORE postage, with the average cost of pocket invites ranging from $5-$9. So, even though our invites were pricey, we still spent considerably less than the average.

I also want to note, Nick’s mom is a calligrapher and one of her gifts to us was handwriting our invites. Each outer envelope, response card envelope, and names on the outside pocket invites were individually hand written.  She wrote master copies of the inside material that we scanned and scaled to size, then printed.  Next week, I’ll include the measurements we used for each section of the invites, and how we assembled them. 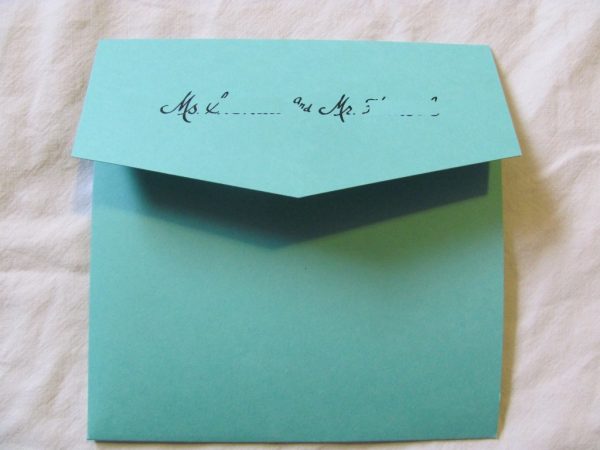 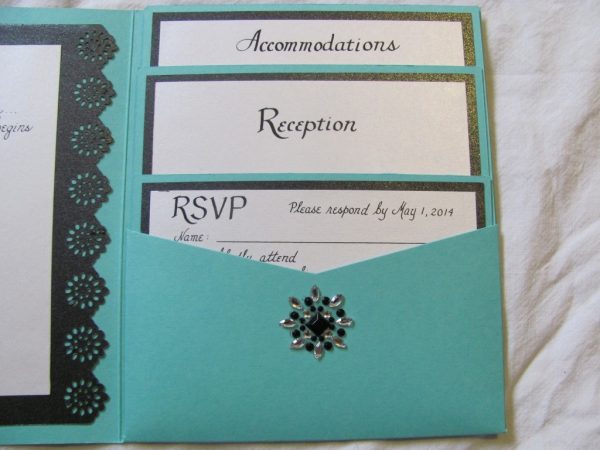