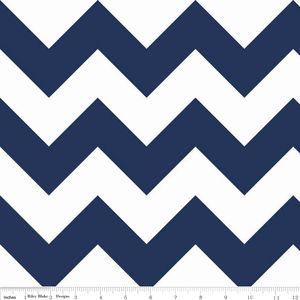 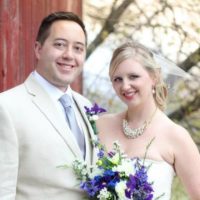 I knew it would happen. The snags that lead to a mini melt-down. I came across two wrenches in my wedding plans that of course I didn’t plan for.

The first snag came up when I was starting to plan out my DIY decor projects. I had planned to make chevron table runners out of a fabric I had found months prior. The fabric was Riley Blake’s Large Chevron in Navy. I’m sure you’ve seen this fabric pattern a lot lately. I did not realize how hard it was going to be to find. Not one fabric store in the Milwaukee area carries it. I found only a handful online that carried it. The store that was the least expensive was Hawthrone Threads which carries tons of modern fabrics patterns.

First the pattern was on back order until early August. I thought, “two months, no problem”. So then I checked at the beginning of August to order the fabric. “On Order Until Late September”. I freaked a little. I already had sent my invites out and invites set the tone of the day. There was just no way that was going to work. What would I do?!

So I started to think of how I could still incorporate the pattern without the runners. What would any fashionista do? Accessorize! I ordered 20 Navy and Plum (my other main color) table runners from Linen Tablecloth for $53.50 with s+h to give the room some color. I also saved 5% overall by liking them on Facebook and getting a promo code (new one monthly). Already knowing my way around a paint brush from my home blog, I decided to paint the chevron onto items that I already had to give that chevron feel without over powering the beautiful barn. Surprisingly enough, heading to my local home store and just buying a few things like extra paint supplies was going to cost me about a sixth the cost of the fabric I originally budgeted. Overall, not as bad as I thought.

On a side note, which also sort of made me mad, the day I bought all supplies for painting and the runners arrived, the fabric was available again. Go figure right?

The second thing that really made me lose it was a snag in the bridesmaid department. My sister is a procrastinator. Always has been. So it was no shock to me when it was late July and she still had not purchased her dress. The dresses are custom Esty purchases which take six to eight weeks to make, so I had to get on her to order it finally.

My sis had a very small wedding in May for just immediate family and best friends, so I knew she was tight for money. Another reason I didn’t get on her until that time to let her build up a little cushion again. When I finally talked to her, she said she didn’t think she could afford it with them saving for their honeymoon and she needed to talk to her husband about it. I said ok, I’ll give you the weekend, please get back to me on Monday. She did and decided she didn’t want to be in the wedding. The cost was too high and there was just too much pressure to be a maid. The cost I understood. The “pressure”, not so much. She was not my matron of honor, who was doing my shower and bachelorette party, so I didn’t know what else she really thought she had to do other than show up.

I was very hurt. You always dream your only sister will be next to you on the most important day of your life. Now she wasn’t going to be. She’ll still be at the ceremony but it will never be the same.

I asked my friend Erika to fill in and she immediately said yes and bought her dress and shoes within the week. Crisis averted but feelings definitely hurt.

I’m hoping nothing else big comes up that throws a wrench in our plans, but no matter what. I just have to roll with it and deal. It’s life. Nothing goes exactly to plan.