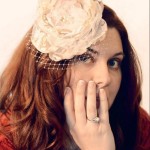 We run in the sort of “non-traditional” realm on some things – which, in all honesty, is where a LOT of brides and grooms fall in today’s day and age. Some of the “traditional” ways are being tossed to the side as we venture into new ideas, a new way of doing things, and personalizing our wedding day to represent us as a couple as best as possible.

Now there are some things that we are keeping rather traditional. One being the first time he sees me will be when I walk down the aisle (we decided not to do a sneak peak, but it was a HARD decision to make!), BUT, we aren’t staying in seperate rooms the night BEFORE the wedding … that’s right, on our wedding day, we will wake up in one another’s arms. He will get up and head out the door and begin his long list of “to-dos” while I begin getting ready after coffee with my mom on the back porch. We won’t see each other again until I walk down the aisle. Second, we are having a rather traditional ceremony, though we are using God’s Knot as a unity ceremony versus the candle (www.godsknot.com) which I did make myself for under $20 versus paying $40 for one offline.

Another “non-traditional” move – our rings. Back when we were talking about getting married, before the ring, we started looking at engagement rings together. The thing that sparked this was primarily the biggest issue – I’d been married before and we both wanted to make sure that my engagement ring was NOTHING like the ring I had before. So we started looking online and one day, I stumbled upon this …

We both saw it and fell in LOVE. We called the store to see if they had any in stock – they didn’t but could get it ordered and in so we could see it in person. But first, we wanted to actually go ring shopping and try out some different styles. It was a no contest sort of deal though … EVERY other ring was just not it. Just seeing this ring made my heart flutter and think “that’s so US!”. When it came in, we went together but he went outside of the store while I tried it on. In a traditional sense, I did not want him to see it on my finger until it was time for him to put it on my finger.

Then came the next part … HIS ring and my wedding band. He wanted a titanium band with carbon fiber (being a car guy and all) and ideally, wanted BLUE carbon fiber. (His car is blue, we love blue, it’s our thing … oddly enough, our wedding is NOT blue!) We searched tons of stores in person and online but no luck – $200-300 and up for the ring he wanted AND nobody had blue. So we started searching online. And we found it … on Amazon.

My fiance’s wedding band – found on Amazon for $29.99 with free shipping and free returns

Skeptical? You bet. So we did research. The thing is, when you go to a chain store, you are buying a NAME BRAND ring. They only work with certain jewelers to stock in their stores and of course, you’re paying more. But AMAZON? The retail price for this ring was over $200 online. There were a few to choose from, so (thank you Amazon Prime Membership for free shipping) we had 3 shipped to us for free AND Amazon provides free return shipping. So it’s like trying it on and returning it. Which we did. The one above was THE ring. Retail was costly but through Amazon, under $30. We read reviews and they were outstanding – everyone who bought this ring said the same thing – EXACTLY the same as buying retail from the name brand. My fiance has worn it a few times to test it out and yes, we agree – this ring truly is the same quality as the ones we tried on in the stores.

For me, it was tough. $4-500 for a band with tiny diamonds on it and that was really out of our budget. A plain silver band didn’t look right when I tried some on with my engagement ring, so we decided that for now, we would plan on a wedding band as an anniversary gift down the road. But then, my little brain got to thinking … what if … the same thing applied to women’s wedding bands? Could it be possible to find one of equal quality online?

I started searching and doing research. I, surprisingly, was able to find a few that I liked, that were white gold and with real diamonds (not cubic zirconia). Some were silver versus gold but it didn’t matter to me. I ordered them with free shipping and all had free returns … and I found my wedding band for under $40.

My Wedding Band – Purchased from Amazon.com for $39.99

So, what WOULD have cost us over $800 (easily up to $1200 depending on what ones we would have gone with, retail) in wedding bands, cost us under $100. Easily, this was the BIGGEST budget saver we have in our wedding. My advice when it comes to wedding bands … do your research. While diamonds are something you need to make sure are the right color/cut/clarity (do NOT skimp on this one) for your engagement ring, when it comes to the band, it’s NOT a big deal. As long as it’s durable and will withstand the years of wear and you love it, that’s all that matters. Spending thousands on these rings is avoidable – case in point!