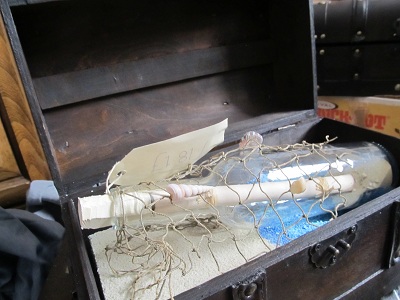 Right after we got engaged (or was it even before?) my fabulous future mother-in-law sent me the occasional destination-wedding idea. One idea was for destination wedding invitations… a message-in-a-bottle. That was an easy decision. YES. Within a month or two of saying “Yes” to the invitations, Brandon’s mom had found us a box of wine bottles that came with tops, from their local u-brew. So that was decided.

The box stayed in the corner of our “guest room” for over a year. (This was the start of the crazy stacks and stacks of boxes and bags and other wedding mess.)

Through sites like bestdestinationwedding.com, and just by doing some Google searching, I found many ideas of what other brides have done with message-in-a-bottle invitations.

I designed in the invitation itself in Word. I found an old map online of the Dominican Republic, and Brandon helped me fade it out in Word so it looked like a watermark under the typing. I then printed them off on paper (from Michaels, purchased during a sale) and burnt around the edges of each one using a candle. 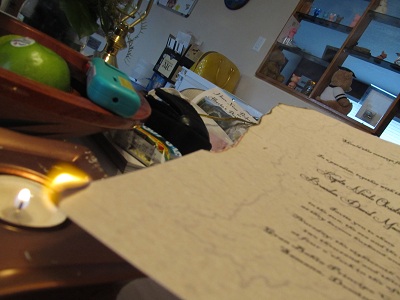 This was finicky, but I didn’t lose any… though one came pretty close. I made sure I had water nearby, just in case! 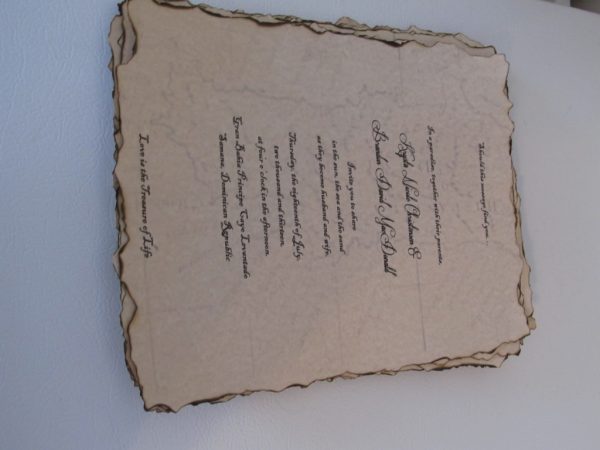 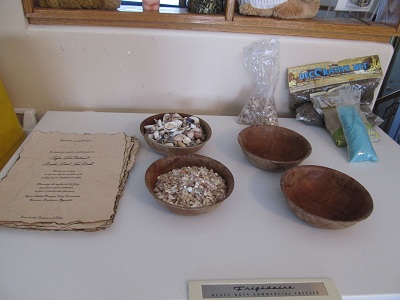 In each bottle I put a little sand and some shells (also from Michaels, purchased with 40% off coupons, plus my teacher’s discount). 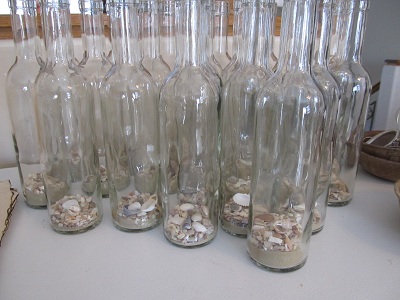 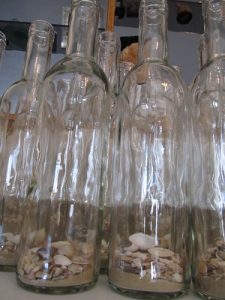 The reply cards were a picture I found online taken at the resort. I distressed it, and printed on the back to make it look like a postcard, and typed “RSVP” on the front, all in Word. They were printed on some plain cream-coloured cardstock I had leftover from previous projects. 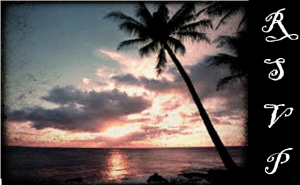 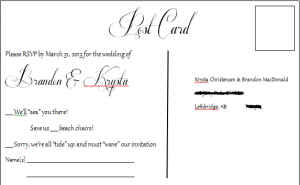 It was tricky to roll up the thick cardstock and RSVP card (stamped, of course) together tight enough, but I did it. Next they were tied with raffia to keep them in place. Then with a bit of hemp attached to one of the raffia pieces, I attached “luggage tags” to each one, with that recipient’s name and address on one side, and our wedding date and website on the other. This is to help get the invitation out of the bottle.

Finally, I took some fishing net (again, Michaels with a 50% off coupon) and hung it over the mouth of the bottle. Then I hot glued a few shells to the net, and put the corks in. 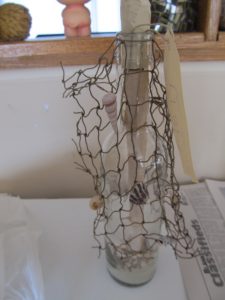 Oh yes, the corks. They came with the bottles, but were not regular corks; these ones were more plastic. They would not fit by hand, and we did not have a corker. So I patiently trimmed each cork down with a sharp knife. This was tedious and probably dangerous, but, clumsy though I am, I did not cut myself.

In the future I would have found someone – anyone – with a way to cork them. I probably could have taken them to a u-brew here, but whatever, it worked.

Okay, so now the invitations are set. But what to put them in? We ended up with a few variations of boxes for these invites, so not everyone got the same. Some people are getting them in the mail… plain shoeboxes covered in kraft paper with the bottles wrapped in bubble wrap and tissue.

Most people are getting shoeboxes that I spray-painted, then fit with a “beach tray” for the bottle. More on those in a minute.

A couple people – grandparents and wedding party members, namely, are getting “treasure chests” from Jysk (on sale) with the same “beach tray” in them. 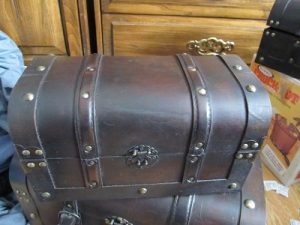 Finally, parents are getting large treasure chests (also on sale). I put a pillow in those ones I made myself to fit.

Okay, the “beach trays”. This was actually Brandon’s idea. Wow.

I took a large piece of foam… the kind florists use. I got this one from Michaels. You guessed it… 50% off coupon. I then sawed (yes, sawed) it down into several pieces to fit cleanly inside the boxes. And I chiseled it out (well, I actually cut out most of it) with a knife to create a dip for the bottle to “rest” in. 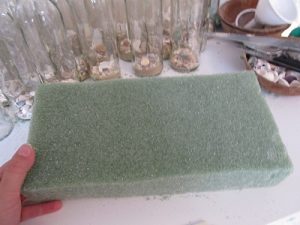 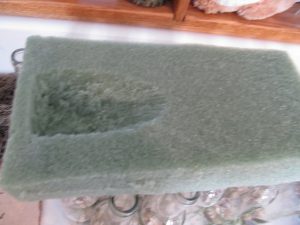 Next I sprayed the foam blocks with glue. Elmer’s works well for this. First you spray the part you want your actual sand on, then cover that, shake it off, then, once dry, do the same for the blue sand. I ended up painting part of the “ocean” look blue first, then covering it with the blue sand, to make that blue sand go further, since I did not have much. 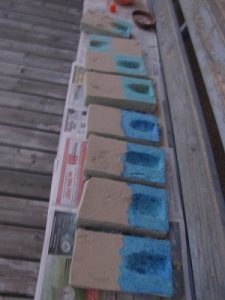 This was tricky to do well, since it was windy outside (which is where you should be doing this.) But then again, it is always windy here. I got it done, it wasn’t too stressful, and I am pleased with the way they turned out!

We were able to hand-deliver most of them, so we only have to mail a few, which is good, because I think that would be the most expensive part of the whole process. 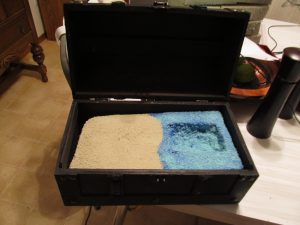 I love them! Would I do them for a large wedding? No way! But for our small destination wedding, I think they are perfect! Moreover, everyone we have given them to has raved about them. They are so surprised to open them, and most people do not believe we did it all ourselves. 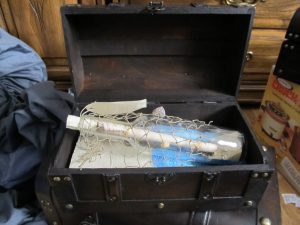 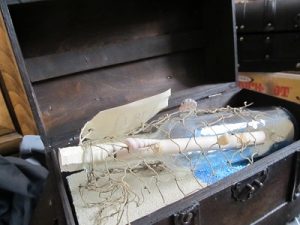 The cost, without postage, was $108.60.  That may not seem like a lot for invitations, but I only had to do, like, 30. It would get WAY out of hand cost-wise if you had to do more. They were a LOT of work, but I did not mind because I think the effect is TOTALLY worth it.

Now, I have seen similar invitations that people have purchased (and not including any nice wood treasure chests either!) that cost anywhere from $7 to $20 per invitation! Ours came in under $4 each (without the treasure chests).

I am DIYing invitations for our at-home reception too, and those will be simpler, since many more will be needed.

(As a sort of funny side note, we have noticed something when people open them… I think they think something will jump out at them! They open it up so carefully, and tend to stand back! It makes me wonder what on earth they are expecting?! Haha!)

So are you creating your own invitations? Would you consider something “out of the box” like I did?

MSN
Bride Refuses Her Stepfather for Father of Bride Role. Was She Wrong?
MSN
10 Best Tips for Brides According To Seasoned Bridesmaids
MSN
Bridesmaid Outraged The Bride Only Shared 10 Pictures. Is She Right?