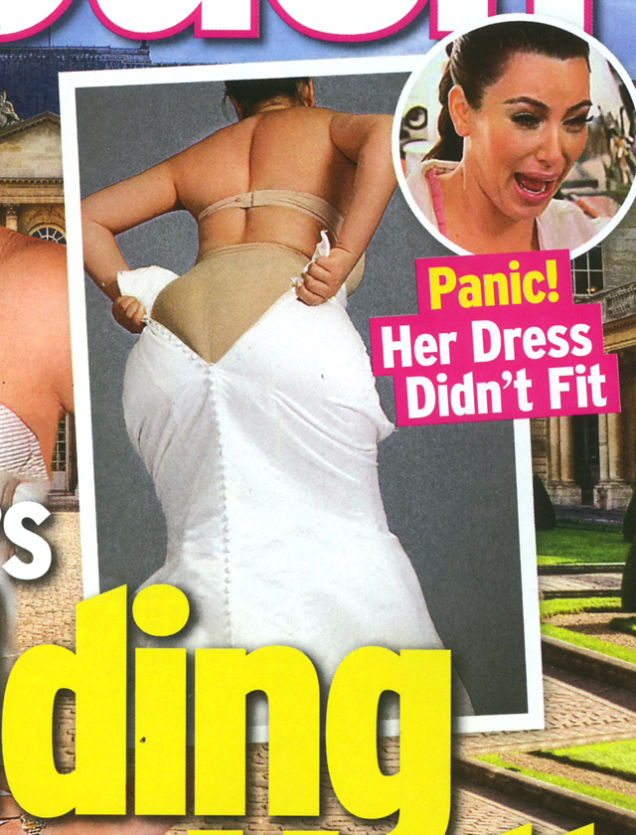 It’s hard to believe but my wedding day has finally come and gone. The final few weeks leading up to the “I Do’s” was a whirlwind of finishing projects and last minute surprises. Fortunately, the honeymoon that followed was absolute bliss! Now, we’re starting to settle back into ‘normal’ life again. I still have a few more posts I’d like to share with everyone in the coming weeks with things I’ve learned, some of the best deals I had found (I didn’t necessarily want to spoil all the surprises ahead of time for guests who have been following along on the blog), how we were able to save on an incredible honeymoon, and give props to our favorite vendors.

I’m going to start with (what felt like at the time) the biggest wedding panic I experienced.  With exactly 7 days to go before the big day, on a Sunday evening, I tried on my dress and IT DIDN’T FIT! The last time I had tried on my gown was at the end of March/beginning of April when I had my fitting. Since less than two months had passed, it hadn’t occurred to me I should probably try it on more frequently – just to make sure my weight wasn’t shifting and I’d need additional alterations.

Well, it happened. The dress didn’t fit. I probably wouldn’t have even tried it on if it hadn’t been for a coworker jokingly asking if I’ve tried on the dress lately. After I said not in over a month, they scolded me and told me I should. I sat on that thought for a few days (I was so busy with other stuff, I really didn’t want to acknowledge there could be any possibility of the dress not fitting and having to add more alterations to my to-do’s!). Plus, I wasn’t overly fond of the original place I had taken the dress to, and didn’t want to think about having to find a new seamstress.  So, when I snuck off into the spare bedroom of our home and slipped on the dress it was loose! The dress was too big in places where it intended to be form fitting. I could pull the dress out several inches in some areas! (Thank you marathon training!).

In a panic, I called my Maid of Honor and texted her some pictures. She calmed me down and got me on the path to start calling seamstresses asap. I came across a local business with an emergency number (believe it or not), but unfortunately the number listed was for a residence who was not affiliated with the businesses. She said she wished it was her businesses because she received calls all the time requesting alterations, and would help me if she could! Kind of odd, but at least whomever I spoke with was nice and understanding. Since it was nearly 9pm Sunday evening, I had to make a list of places to call Monday morning.

I started out making calls by times the tailor shops opened. The first few places I called did not have time to look at the gown. Backing up, I originally purchased my dress in Dallas, so it wasn’t possible to return to the store for a fitting. I was holding off going to the alteration store I had previous work done at because I wasn’t fully satisfied with their customer service. When I picked up the gown, the lady working couldn’t show me how to bustle it (another lady completed the work) and wasn’t able to give advice on a few questions I had asked her (What can I do to make the lace shoulders lay flat?). I was able to meet with a seamstress who was willing to evaluate the work needing to be done later that afternoon so I took off from work and flew there. While she was wonderful, and gave lots of advice, she told me she wouldn’t have time to work on the dress until Friday, and couldn’t guarantee finishing the dress in time! So, the search continued.  Nick, my husband, made a few more calls without any luck (nobody had time to squeeze in an emergency alterations).

Thankfully, I was able to make an appointment for Teresa’s Tailoring in Kalamazoo Michigan for Tuesday afternoon. At least I had another seamstress willing to evaluate the gown! I have to admit, walking in I was still worried she’s say it was too much work and turn me away. Plan B was to try and tackle alterations myself with my maid of honor (I would have been a nervous wreck removing stitches!), and Plan C was to revisit the Friday seamstress and pray for the best. Thankfully, I didn’t have to try out any backup plans. Teresa and her assistant Marianne were wonderful from the moment I walked into the store! They were understanding and patient with me, and told me they could have everything taken care of no later than Saturday! A day to spare before my Sunday wedding!!!

I actually got a call on Friday afternoon the dress was ready and I rushed over to pick it up after I finished with my hair appointment. The dress was perfect! I couldn’t have asked for a better job done, they had the dress altered to perfection, had it pressed, and ready to wear!

Their prices were extremely reasonable, $35 for alterations, $30 for steaming, and $25 for rushing so $90 total.  As a comparison, at my original tailor shop a lady had come into the store asking for a 2-3 day rush dress hem and was told the rush fee alone would be $75! This didn’t include the actual alterations!

Thankfully, everything worked out in the end.  I’m a firm believer in everything happens for a reason, and I ended up being happier with the fit of the dress after the last minute alterations than I was before with the original fitting. I’m so happy Teresa’s tailoring was able to alter the dress and save the day!

Let this be a lesson to the rest of the bride-to-be readers –you can never try  on your dress pre-wedding too often! Try it on frequently in the weeks approaching your wedding to avoid any last minute hassles or surprises!