The Definition of a "Budget wedding" 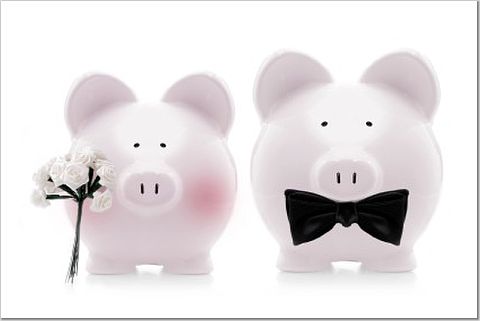 What are the aspects that make a wedding a “budget wedding?” Denise explores the definition of a budget wedding in this post.

While on vacation, I overheard a couple say, “We try to save where we can. I bought a coupon book for $100, and after using 4 coupons, it pays for itself!” Mind you, this was while all three of their children were wearing designer sneakers and playing with their own personal iPads. This was when I realized that depending on a variety of factors; the definition of a budget is drastically different depending on who you talk to.

So when we decided on planning a wedding on a $5,000 budget, we thought it was reasonable. With an assumed guest list of under 100 people, that averaged that out to $50 per guest. I knew this was much smaller than the average wedding cost ($26,000+? No thanks!) I’ve always figured that this number was skewed because of those celebrities who have $1 million dollar nuptials. We didn’t really see this as a budget wedding, as much as a wedding that was within our means; a wedding that we could afford without breaking the bank.

When I started talking to newly married friends and family as well as fellow engaged pals, they were all surprised at our number. And those weren’t the only people who were asking about our budget. It seemed like every time someone I knew found out I was getting married and didn’t want to spend a lot, their first question was whether or not I’m jealous of opulence. In the beginning, I never was; I was thrilled that I was going to be spending the rest of my life with the most awesome gentleman I know.

Then, the reality of the expense involved with hosting a large-scale event kicked in. I got scared; I worried that we would have to cut our guest list or that we wouldn’t be able to find a venue. It seemed like every other day I was hyperventilating because I thought we couldn’t have a wedding. I would yell something ridiculous like…

“No one will want to sit on metal folding chairs, and renting a better type is too expensive! We have to elope!”

I realized how silly it was to think that $5,000 was an unreasonably small amount of money to budget for a wedding. I also realized that no matter how many commonalities you have with your friends and family in regards to general economic standing and financials, weddings are a whole other ball-game.

At the end of the day, your wedding budget should reflect your own personal priorities, values, and financial situation; no one else’s.

So readers, have you had issues explaining or justifying your budget (or as I like to call it “within your means”) wedding to friends, family & the occasional nosy stranger? How do you go about it?