What was your total budget? Please provide a budget breakdown.

How did you meet?

Shea and I met in High School. We weren't dating then, but I knew him as the kid with the mohawk and he knew me as “Becca's sister.” After graduating High School I won a vocal competition in our town, Shea's mum was at the competition. After the show, she gave me Shea's number and urged me to contact him. Shea, at the time, had a recording studio in his bedroom. During one of Shea's spring breaks from college we met up and spent the night recording a song that I had written. We would hang out most weekends when I was back from College at a local bar that had live music every Friday and Saturday. We finally told each other how we felt a few years later, and the rest is history.

What is your proposal story?

I had always wanted family present during the proposal. I think I just wanted our families to be a part of it.

It was Boxing Day (the day after Christmas), a holiday our families celebrate together with food, drinks, and a jam session. I had decided to wear a Christmas Tree onesie that day just to be a little crazy. As we were about to jam, Shea took a moment to get down on one knee- It was pretty perfect.

Tell us a bit about your wedding vision.

We definitely had a big vision, that we then realized wasn't as important as the two of us getting married in front of all the people we love. We had a date before we had a venue. My grandmother was visiting from England during the summer and it just seemed right to try to do it while she was here.

We had a friend get married at 447 and it was beautiful, so when we learned it was available- we grabbed the venue.

Shea and I love Mid Century Modern furniture and design, so we applied that to our signage and handouts.

Our colors were blues, blushes, and white and for flowers, I just wanted as many greens as possible (I count this as a color).

Tell us about your attire choices.

Shea had previously worn a suit as a groomsman for his friends' wedding. He loved the suit and liked the way he looked in it, so blue became a color of ours.

My dress had hints of pinks and purples in the material. I ended up telling my bridesmaids just to find something in a blush color. I just wanted it to be something they loved.

What was most important to you two while planning? Was there anything you chose to splurge on or skip?

There was a moment when I wanted to make these mid-century modern table numbers. I wanted to get a wooden block and buy these numbers and attach them to the block. I also wanted to get a big piece of wood and Cricut (vinyl cutter) everyone's names for the table placements.
These things I thought were important until I realized the amount of money, stress, and time it would take to accomplish them just wasn't reasonable. I don't regret not doing those things at all- my wedding, I feel, was perfect!

What were your favorite parts of the day?

I think my favorite part of the day was getting married and it being official!

Another favorite part: Well we decided it would be nice to write notes for each other that we could open in the morning. Upon opening the notes I realized we both wrote pretty much the same thing. My note “POOP, You thought this was going to be a love letter but you were wrong.” His Note “Don't forget to POOP before the wedding.” I don't think we normally joke about poop, but I thought it was pretty hilarious we had the same thought.

Tell us about your wedding flowers.

My wedding flowers were one thing I know nothing about. I had shown Jess Coner the types of flowers I liked, I told her I loved greens as many greens as possible and then babies breath is my fave too! She was amazing, I didn't even think twice about it. I knew what may not have been possible due to the season, but the flowers were even better than I could've imagined. She came and put together all the bouquets and decorated the signs etc with greenery. I was just amazed by her talent and eye for a floral arrangement.

Tell us about your wedding cake.

Our wedding cake was made by Jordan Fuchs and it was delicious. We didn't get a traditional white cake. We had seen Jordan's Instagram where she had made a Ferrero Rocher cake. So it was a no brainer that we wanted one of her cakes! Her cakes are beautiful and delicious. We saved a piece for our one year anniversary and I can't wait to eat that cake again!
For guests, we had donuts from a local bakery (my husbands fave sweet treat).

What did you do for favors?

Favors were difficult. It's hard to give guests a gift while staying on a budget. We realized that buying custom glasses was cheaper than renting glasses- so we decided to design custom glasses that people could take home with them.
We also had a surprise favor that my mum had made for us which was custom guitar pics.

Table numbers: I ended up finding white vases in a Goodwill for $1 so I cut out vinyl numbers and stuck them on for the table numbers.
Table Decor: As a surprise, my sister had put one of me and Shea on each table from our childhood to now.

Did you include any family heirlooms or special traditions?

I had been to weddings where they had photos celebrating the lives of those who couldn't be there. I've always liked that tradition. So, on the bar, I had bought 4×6 and 5×7 frames from target all different styles (but sticking with our colors) with people who are no longer with us.

Do you have any advice for couples planning their weddings now?

My advice is to think of 5 things that you can't live without in your wedding. Stick to those 5 things and I think you'll have a wedding you'll love!

Although it is just one day that you won't do again, it doesn't mean you'd have to go over budget or care about all the small details. I think just remember in the end you're marrying your best friend surrounded by everyone you love and above all else, that's what matters.

Share your love story for a chance to win up to $25,000 worth of gifts from your Amazon Wedding Registry! 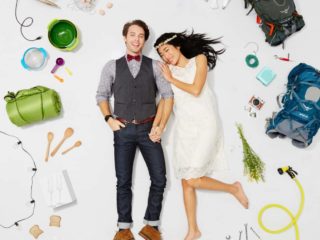